As a young girl, at family gatherings, I remember watching the “old ladies” do their quiet magic with crochet hooks. I was fascinated watching the quickness of their fingers, hearing the gentle clicking of their crochet hooks and marveling at the beautiful and intricate finished projects. Even to a child, it was magic. They sat quietly in corners, always being useful, keeping hands busy, and working intently on their intricate projects.

My grandmother was one of those crocheting ladies. Grandma died at age 99, about 30 years ago, and she told me this story, about HER great aunts.

“They were leaving Germany, for political, or economic reasons. This would be a long journey, on a clipper ship -- to unknown places -- you know, ships had only sails in the mid 1800s, and it might take 6-8 weeks if weather was good, but longer, if weather did not cooperate. For this particular group of immigrant ladies, somewhere along the way, the story goes, they were tragically becalmed (no wind) for many weeks. "

As she told me the story, I piped in something about, “the poor things, “starvation”, “scurvy” “how terrible” “what did they do?”, etc. Her response was unexpected ...

“Becalmed? Starving? It was MUCH WORSE than that!!!”

Even worse than “starving”??? 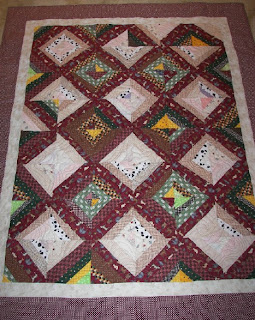 I posted this recently, but today it's DONE. And done in time for the Linus Project deadline.

In my opinion, a LOT of quilting was needed to blend the raucous colors to some degree. I quilt on my DSM. And I had to use one color, a medium brown/tan, that still is too obvious but what else can one do with this project? The beginning quilting is always better than the end quilting since by the time one gets near the end, one is really getting tired of the job! We quilters could use a new book that helps us carry on with enthusiasm after the excitement of a new quilt begins to wane, and we get to the "I'm sick of looking at it" stage! If you have one, drop me a line.

Below is a closer shot of the topographical contour pattern. This took a LOT of quilting, and impatience DID enter the picture. 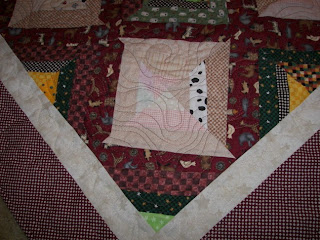 I'm trying to show the quilting with better lighting. Not sure it's successful, but again, it's DONE. 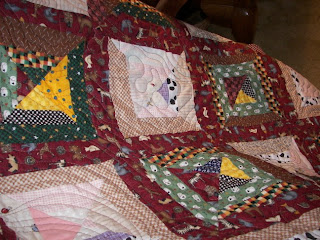 I quilted stars in the cream border with a light thread, and in the outer border, straight boxy lines, trying to follow the darker lines in the check.
Posted by Elaine Adair at 8:38 PM 6 comments:

Yesterday was a beautiful day – much of our snow was GONE, although patches still existed -- I couldn’t wait to come home and WALK OUTSIDE in the sunshine!

Although I had to BEG, DH joined me, but argued about it’s benefit. My solution to winter blahs and any ailment, is that sunshine, exercise and looking at our big blue sky has restorative and recuperative properties -- he reluctantly found a hat and jacket and joined me, grumbling.

We have sidewalks most of the way, although snow and ice and puddles still existed.

All went well until he saw a former co-worker driving down the street. As DH spontaneously stepped into the street to hail and wave, SOMETHING went wrong, and splat! Uhhhh, wha happened? There was leftover ice on the roadside. Did he slip on that? Of course, he was totally embarrassed, and popped up in a moment with my immediate assistance. Meanwhile his friend had stopped his vehicle and backed up to be of assistance, and MORE street traffic stopped – an embarrassment to anyone, but this was a former co-worker! Arghhh – the story will get back to his old office about “poor ole guy – see what happens when the boss man retires”! A devastating event for the macho ego, and he’s insisting “I’m not going to admit any damage in front of anyone, by gosh – I’m just fine!”

Checking to see what had caused the problem, snow? Ice? What??? I looked at DH, and in addition to being very muddy, his backside, back, knee, leg, and arm and shoulder for gosh sakes were generously smeared with chunks of ...DOGGIE DOOOOO .. ARGHHHH, yes, that’s what caused him to slip, and, since I helped him up, I also have it on me (no gloves) -- I’ve stepped in it, brushed off his backside, back, leg, arm, and my hands were covered before I realized is was NOT mud! Frankly, we STINK like SXXX!!!

OK, trying to gain composure, clearly stating he is perfectly OK, we trudge home, smelling quite terrible, trying to make light of the situation, but we are both thinking of complaining to …the dog? , hollering at … the city? Who can we blame for this misadventure? 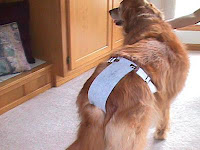 Arriving home requires carefull peeling off our stinking clothing outside on the deck, shaking the clods of Sxxx off of his jacket, jeans, and both our shoes, hoping our neighbors don’t complain about these 2 senior citizens stripping in plain sight! Hole in his jeans, bloody knee and hands, in addition to embarrassment, and mortification, and, even his WALLET (worn in back jeans pocket) is full of SXXX! That was just tooooo much!

Today, I'm hearing a lot of groans and moans from DH. We are waiting for the telephone calls and guffaws, and jests. I think he's in one piece. My poor baby.

Today is another warm spring-like day - A walk would be nice.
Posted by Elaine Adair at 12:25 PM 16 comments:

"Can't See the Forest for the Trees" syndrome 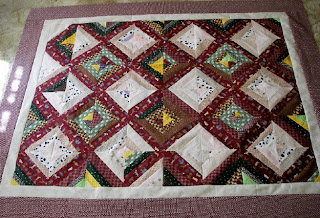 This was supposed to be a finished, albeit, extremely busy Linus Quilt. Do you see my dilemma? To rip or not to rip, that is now the question.

This is the perfect example of one of my weaknesses. I get so involved with the minutia (ha, I've not used that word in a while), I forget to check the overall precision, hence "Can't see the forest for the trees."
Posted by Elaine Adair at 5:30 PM 22 comments:

Email ThisBlogThis!Share to TwitterShare to FacebookShare to Pinterest
Labels: strings 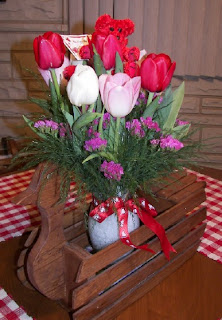 Gotta show the pretty tulips! There's a little red teddy bear in there somewhere. I dug around my 'stuff' and found a second one to join him.

Yesterday was quilt guild day and the program was Hunter Star. These are the batiks I chose. I made just 4 blocks, keeping my project do-able. The instructor (thanks Joy!) did not use this book, but I had it already and would recommend it. This book by Jan Krentz, is beautiful, based on the Hunter Star. This pattern can be made a bazillion ways, and her book is plum full of lovely photos and ideas. 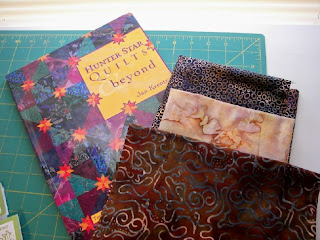 The sample packets of batting (below) are made from corn -- one is 100% corn, and other is 50% corn and 50% cotton batting, marketed by Mountain Mist. Interesting - they both feel good to me. The one with cotton in it had a bit more 'grab' to it. Recently on a mail list, they were talking about another new type of batting made of bamboo fibers. 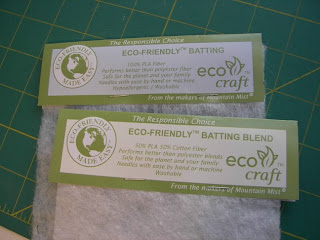 This is my unquilted project. While the layout looks complicated, it was not (as is often the truth). I DID use a nifty 45 degree diamond ruler that helped keep the angle accurate. The light streaks were coming in the window, a very welcome sign that spring might be showing up eventually. 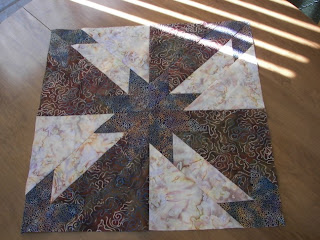 How many names are on your Bloglines?

2. When you type any word beginning with the letter "Q", does it come out "quilt"?


Another project bites the dust, along with about 15 yards of fabric! Yeah. It's quilted (on my DSM), and ready to be folded up. Maybe I'll take it for next Show and Tell. I'm a little disappointed in the thread I used, and realize I let someone else tell me what I should have used. With a quilt that has so many very lights and very darks, I had wanted a medium blue thread, but was talked into a lovely variegated dark, and a lovely variegated light (both cotton). Since I couldn't figure a way to transition from lights to darks, I just continued with the dark, and of course, it shows every wobble. It's OK, and will be a very good usable quilt.

Somewhere in my past, I had a very nice thread, purchased from JoAnns, that had two colors intertwined. That particular color was a brown and a tan, which helped to blend a quilt that was again, dark and light. I was hoping to find it at JoAnns recently, but NO. BTW, yesterday I was at JoAnns and had a spool (1200 yds) of varigated thread in my hand at the checkout. I had my coupon in hand for the 40% discount, and before the discount it rang up to $10.18 -- FOR ONE SPOOL OF THREAD???? I put it back. When arriving home, I checked my Connecting Threads and hey, similar varigated spool is $2.95. What the hey?

This Star pattern came from Bonnie's excellent instructions - she calls hers "Star Struck." This went together very well, and even the tiny triangles were saved from the quick corners. I still have the reds, all sewn up, for another project. Thanks Bonnie!

Here's a closer shot of the swirls, and also of the back, using plaid stash fabrics. I only spent money on the thread and batting.
Posted by Elaine Adair at 1:42 PM 17 comments:

Is this a little 'busy'? 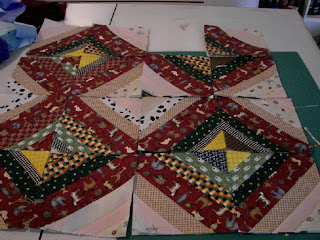 While I LOVE to have a kid quilts include a lot of visual 'stuff', these blocks are just a teensy bit, 'over the top'! LOL I've made only half of the blocks, so I'll try to tame the other half with calmer strings.

Hopefully it will be finished in time to be included in the Linus Project, at the end of the month.
Posted by Elaine Adair at 1:34 PM 12 comments: 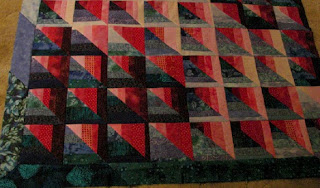 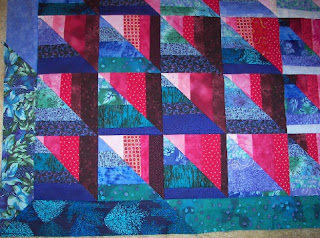 Finally, it's coming together. Several bloggers have ASKED me to keep posting my continuous struggle. This has been WORK!

The top photo colors are not accurate, but you can finally see what's happening with the lights, darks, and the shaft of light radiating from the upper left.

The bottom photo colors are close to true. And I LOVE this corner. Three more to go!

The new part is a 2.75 inch (half of the block size) inner border and the colors blend from light to dark. The pieces are joined diagonally, so they hit the seam perfectly - tedious but rewarding. At first the border pieces were approximately 1/3 of each color on each side -- no good at all. Had to redo them to get a pleasing visual ratio.

There may be one more border after this, made up of half square triangles, again, blending in value from light to dark.