These blocks were made a while back - I made the scrappy WELCOME  banner from crumb leftovers, but finally the blocks are together and that kewl sashing is DONE!  A border is in the making.  Right now, this is 51 in. x 63 in.  No plans for recipient yet.  This 9 in. block is simple because the points are snowballed in the 3 1/2 in. square corner units.  Do you call it a Shoo Fly or a Monkey Wrench? 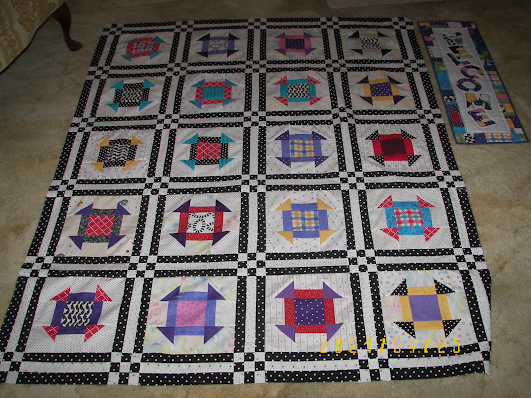 New Carpet:  I ordered carpet from the local neighborly supplier for my living room, AKA my Design Floor.  Due to our remote location, we don't expect weekly or even monthly carpet delivery so I was prepared to wait.  I called to check on a timeframe and  was told  "it has been held up due to the ship that got stuck in the Suez Canal. "  How bizarre can things get?   It's almost funny but when you think about it, but hundreds of huge ships were backed up going in both directions.  Other businesses are suffering the same issue.  We tend to think everything is available all the time, don't we?  and forget about the source of ordinary products.  Guess I will revisit the carpet shop and go thru that tedious selection process again.

Learning Every Day, and Interesting Fabric

I learned something new - With repeated difficulty getting a new blade on this seldom-used rotary cutter I discovered the little black washer has a squarish center going in one direction and roundish going the other way - ya gotta pay attention.  OK, now it will work - I thought. 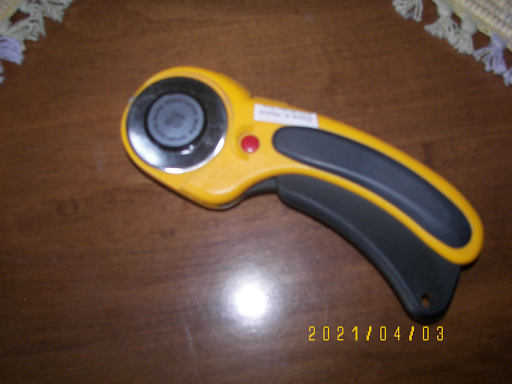 It was still so awkward - then  I discovered the cutter can be used left or right handed and I had the blade loaded on the left handed side!  Who knew?

My current project is a sampler, making 2 of each sister block, but separated, with one colorway on one side, the other colorway on the other.  Book is called "Sister Sampler Quilts".  A friend and I decided to do something together, in town, to feel a bit more socialable after being cooped up.

I already had a pretty FQ bundle of something - had never opened it, said Free Spirit on the ribbon, so I grabbed that to make blocks, not prepared for some of the fabric included in the bundle.  Ya jes' can't use some of these fabrics for any ole project.  This piece was the right overall color but look when I opened it up.  Is this not amazing? 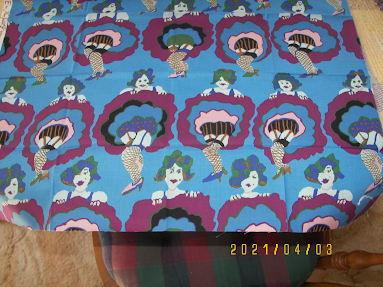 Happy Spring Everyone!
Posted by Elaine Adair at 5:11 PM 8 comments: