In a frenzy following too much really strong iced tea, I started making 9-patches from my 1.5 inch scrap box, continued for 2 day, wondering what I'd do with them, then remembered Tumalo Trail, a Quiltville.com design that has been tempting me.  My "pile" of "to-dos" is also on my sewing desk, and I'm to the point of being overwhelmed by the eternal clutter. Oh good grief, Elaine, you have GOT to cut that shirt up (left in photo) one of these days! 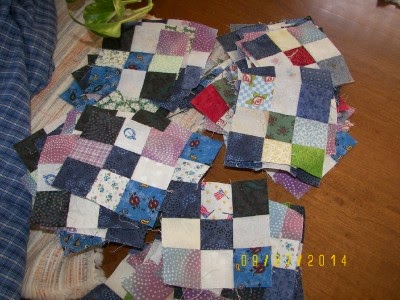 Uhhh, that shirt cutting job ... that shirt kinda looks OK with those 9-patches. Wonder how it would look .....? 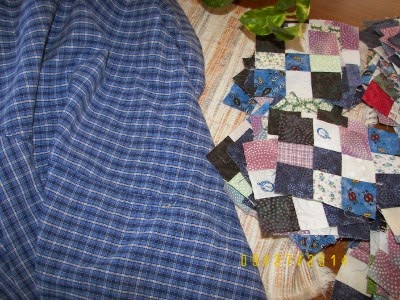 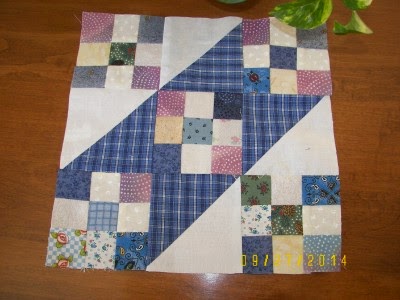 I might include a narrow sashing to solve the problem of all those seams needing to match.  I never would have included that lavender, if it hadn't been accidental!  I will have enough of the blue plaid for most of the quilt top. 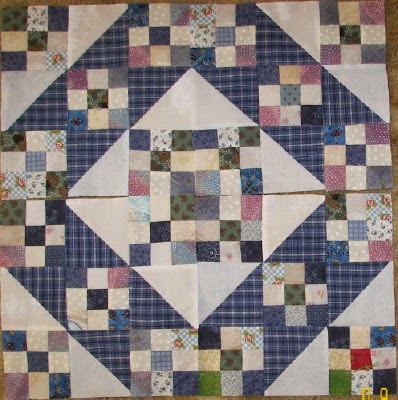 Our last local gathering produced a LOT of pillowcases.  I had cut up a bunch of fabrics, both body, cuff, and accent and brought it all to our sewing group.  12-14 yards used!  Yeahhhh!  We mixed and matched the parts, and various pillowcases went home for final sewing.  These will be going to the DOVES, and the number we donate will count towards the "Million Pillowcase Project."   It's funny how our fabrics we've had for years look pretty spiffy when made into something else beside a quilt. 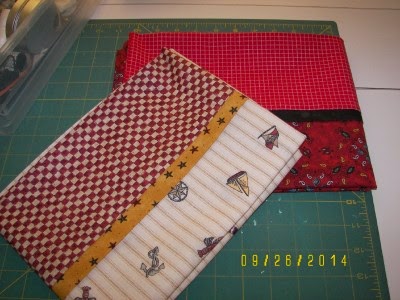 We're supposed to clean these machines? 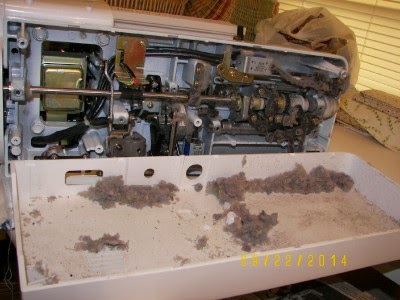 The bottom of my Janome 6500 can be easily opened up for occasional cleaning, by removing 5 screws.  The last time I cleaned it was ... uhhh, over 5 years!  (I DO clean the bobbin regularly.)  This job was necessary because my always reliable machine was not machine quilting well.  Despite all the internet help, friend help, manual help, etc., it still was skipping stitches.  Off to the sewing machine hospital.

Is this not terrible???? I have probably quilted 15 or more quilts in the last 5 years.

I vacuumed it with the big, household vacuum cleaner, then blew it with canned air and it dislodged several clumps, that were like felt pads.  Wow - who knew???

It normally sits IN a sewing desk - taking it out like this is not a small job.  I promise to do it more frequently. 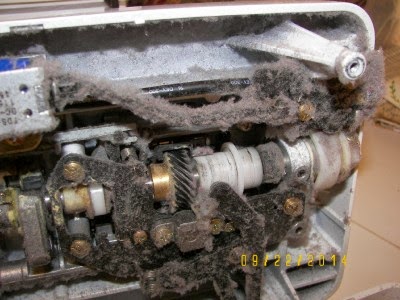 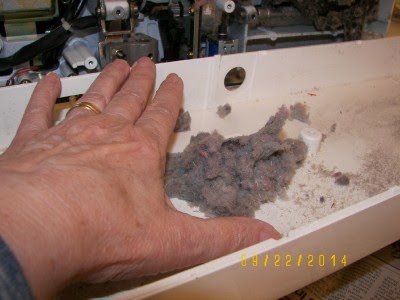 I have been working on this pineapple quilt, now called Hedgehogs in the Daisies.  Named because, I was noticing how "Prickly" it was looking, one of the results of paper piecing.  It began to look like pine cones, but then what would pine cones be doing in Daisies?  So, it became hedgehogs instead.  This project seems to never end!  My blocks are rectangles, I stretched them from squares, and I made the corners different, causing myself all sorts of confusion, eventually solved by drawing colors on the back of each paper.  You might notice, I have continued some of the quilt inside, into the border, so the quilt doesn't just END at the border.  I hope there is some continuity. 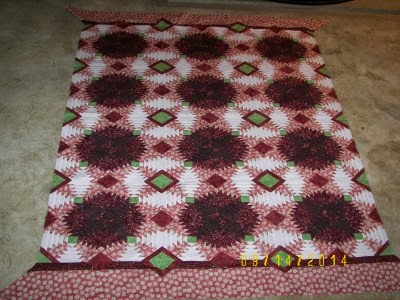 The brown triangles (below) are also now extended into the border.  The green/brown triangle is sewn in here, not pressed down (fusible).  It will overlap the double border.   I have used this technique before - this time it is tedious!!! The top and bottom shapes are not the same as the right and left shapes.  I realized that late into the process.

Efforts to extend the corner triangles into the mitered corner were a failure.  I may revisit that option when the miter is all sewn in - not sure.  Sometimes it's better to stop making more work!

This is not a large quilt.  The little strips are about 3/4 in. finished.  I think the quilt is now about 60 x 70 with the border, maybe less. 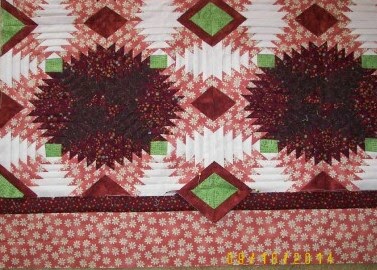 Something new - Our awning over the deck had seen better days.  Gears were seemingly stripped, so, "Call the Man!"  This is a Sunsetter, and was installed by a roofing contractor.  It took weeks, not days to get the finally adjustments made because of unusual rain, downpours, hail, etc.  When you live far from the larger town, contractors don't just run out and finish the job - they come when next they have another job.

The awning gives us another space when weather is nice.  It's not easy to get a nice photo - perhaps I have to climb the tree!  We always roll it up (manual, not electric) when frequent wind picks up. 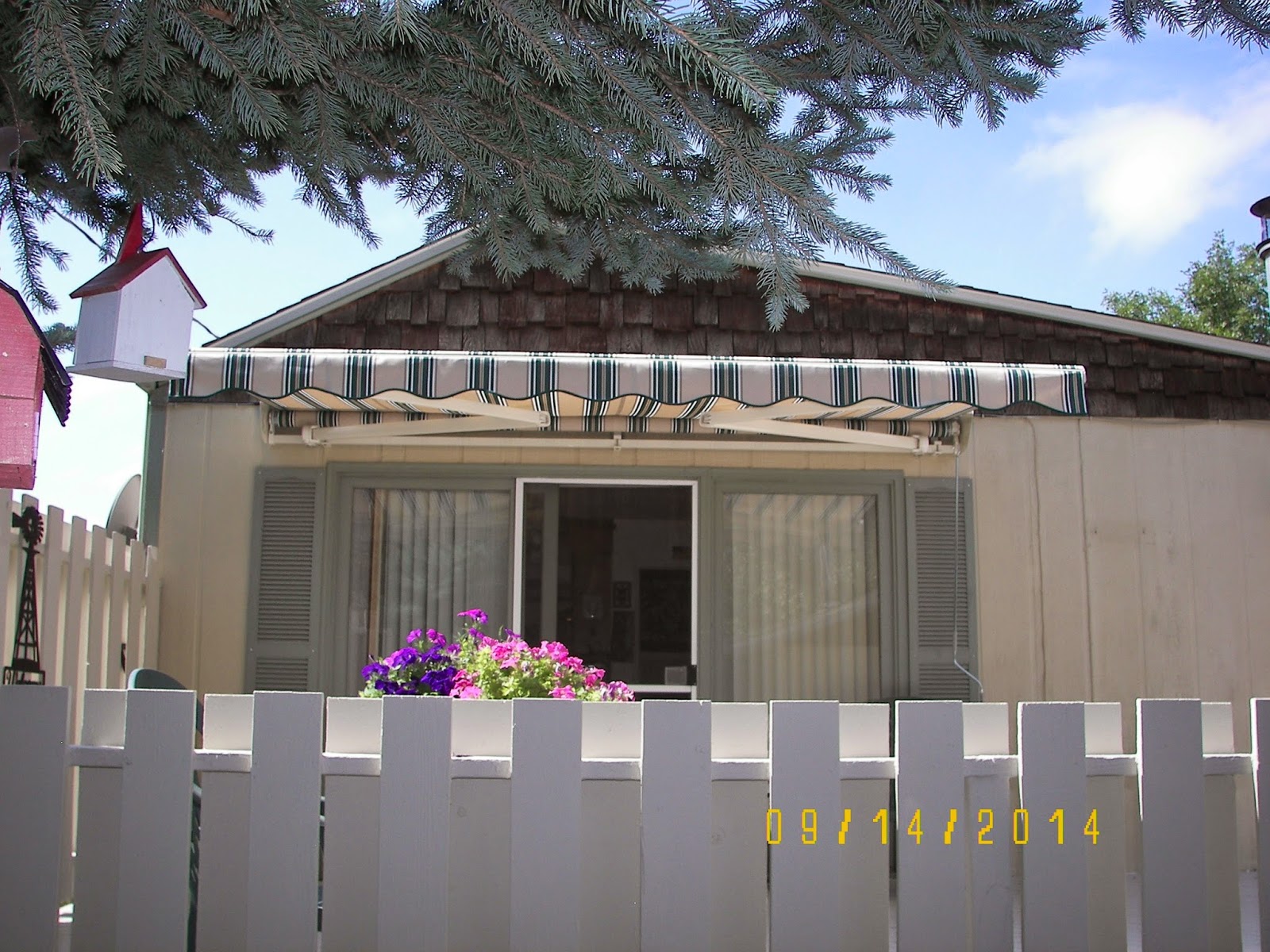 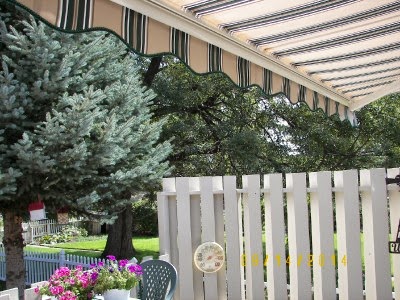 Yesterday, we took a day trip, a train ride on an 1880 train, in Hill City, SD, 3 hours north of our home, through so much open country, then Custer State Park, and more.  There is NO traffic out in the open country!!!  The day was beautiful, scenery lovely, this was a Wine Express, with wines and lunch provided on the train by Prairie Winery.  Lovely!  I was unable to get a photo of the old engine, but what a machine it was, puffing out black smoke as it snaked through rocky spaces, past mountain homes.  We saw many deer and turkey. It was a beautiful fall day, warm and sunny.  Most of the recent snow was gone. 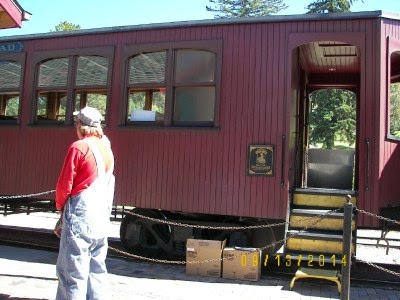 Email ThisBlogThis!Share to TwitterShare to FacebookShare to Pinterest
Labels: 1880 train, awning, Hedgehogs in the Daisies, pineapple 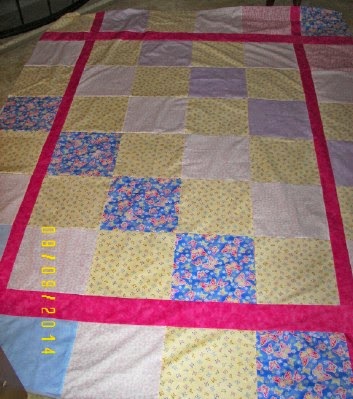 My previous post mentioned the error when measuring for the backing for a Linus Quilt, Scrappy Trip Around the World.  I was "shy" about 1.5 inches in width, and 4 inches in length.  I didn't have any more of any of the fabric in those squares.  Luckily, none of the 10 inch squares were sewn together, and I HAD this bright pink.  I was not thrilled with those pale, pastel fabrics.

I was so pleased with this solution that both DH and I agreed it could be used as a "real" quilt top, but NO, it will be the backing.  The pink jazzed it up, and improved the entire coloring, as well as solved my measurement problems.  What a perfect example of errors turning out better than the original!  It actually IS a 2-sided quilt!   I tend to be not fearful of errors because of the great pleasure in getting out of trouble!

Famous last words when finishing a quilt (or a backing), "It turned out better than I thought it would."
Posted by Elaine Adair at 12:39 PM 3 comments:

Here's a Scrappy Trip Around the World, for a girl Linus Quilt, yet unquilted.  The SAME fabrics are used in each of the 48, 12-inch blocks.  This clever quilt originally came from Quiltville.com
- thank you bunches, Bonnie!  The finished top always looks so cool, no matter what fabrics are used.  Even if one uses a variety of fabrics in each block, I like to use one constant in all the blocks - pink in this case - to provide continuity. 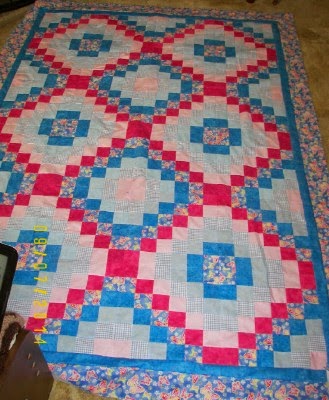 The backing will be 6 x 8, 10-inch squares, not yet put together.  Here is a closeup of the butterflies in the border.  I named this one "Blue Skies and Butter Flys".  8-)) It is a little large for a small child, but good for the older kids who sometimes get lost in the attention to little ones.  This quilt finishes at 59" x 83".  My backing squares finish at 60 x 80. mmm, do you see my problem?  This is called "Poor Planning"! 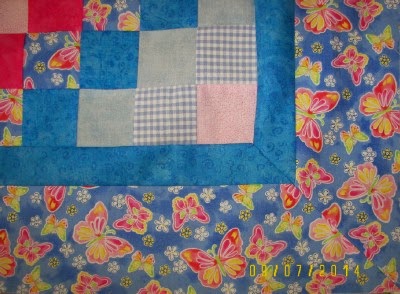