My friend in Illinois, a friend since High School, sent me a birthday box, full of surprises - I've told everyone about our owls, and she remembered that the screech owls seem to have chosen a home elsewhere. She is so thoughtful, and sent me this version to give me smiles. 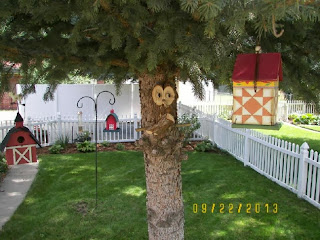 My friend Sydney (no blog) is leaving this area (western Nebraska) and moving into a smaller home elsewhere.  She has decided to sell her longarm.   If you are interested, please contact me with name, e-mail, phone, etc., and I'll forward your message.

Table Runners, and "Stringin' My Blues," 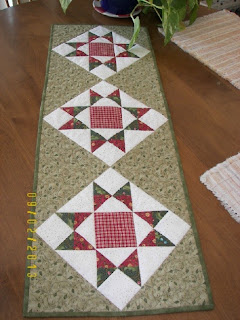 I'm either really early or really late with a Christmas runner!  Fingers were itching and I HAD to sew something!  This is a Missouri Star.  I quilted around the star with invisible thread and made small paisleys with a soft variegated green in the green areas.  Colors are richer in person.

Success breeds success and I made another one with a regular star, for Fourth of July (below).  The original plan was to quilt the side setting triangles in glitzy fireworks, but my LQS did not have the "right" thread - (that's a first!) - and I'm thinking it's fine the way it is -- I can add "glitz" later.

I'm trying to come up with a good border idea for my Rocky Road to Kansas, now called "Stringin' My Blues" - oh yes, using up strings.   This was supposed to mirror the centers of the star blocks. Uhh, I'm not feelin' it!  Try again, Elaine Adair! It's always good to try with a FEW blocks before cutting fabric when one is unsure.

And now, to my Design Floor -- shade over your eyes - this appears more "in your face" than my planned finish, and when I trim to better proportions, this border idea will "do it".  I'm sewing strings to phone book paper.  This is a 4 1/2 border, but I'll trim to 3 1/2 inches.  I'll widen the white border #1, to the proportion of that side setting white triangle, and will narrow down the string border, and will likely add yet another white border, same proportion, ending up with a 9 inch border.  The quilt blocks are 12 inches.  I'm happy!  For me, it was important to carry on the suggestion of frugality, strings, using up, and making do.  My border strings were approximately the same width as what is used in the stars.  And yes, I AM using blue strings from various projects as well as adding a few new ones to the mix.  There actually are NO more blue strings in my String Bin!

Hooray, energy and enthusiasm is restored in MY Studio.