Going to See the Bald Eagles

(I have a high-school friend who lives near Chicago, and I wanted her to see something of where I've settled.  There is nothing quilty in today's post. )

Yesterday we had the opportunity to view the Bald Eagles about 130 miles from our home, at the base of Kingsley Dam, near Ogalala, Nebraska.  This is a long trek through open, seemingly uninhabited grasslands of the Western Nebraska Panhandle.  For this  women born in Chicago, and living half of her life in areas with wall-to-wall shopping malls, landing in this open country took some time to get used to, but overall, given the choice between the two kinds of areas, I'll choose this one.

I'm including photos of our drive and maybe you'll agree to the part about "open country".

The eagles are usually in this destination from late January to early March, so the window for viewing is narrow.

Each of the first photos are rather indistinguishable -- but they ARE in order leaving our house in town.

Below is "Second Thirty Miles" with one of the usually-visable BNSF coal trains next to the highway.  They come from Wyoming, going to Kansas.  I always wonder, given the hundreds of loaded coal trains we see, "Is anything left of Wyoming?" 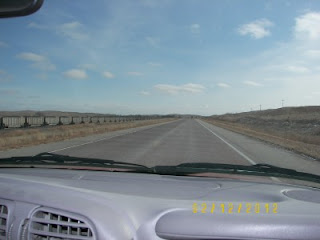 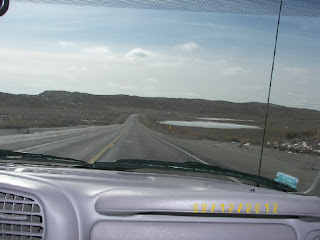 And here is "Fourth thirty miles" -- notice a pattern? 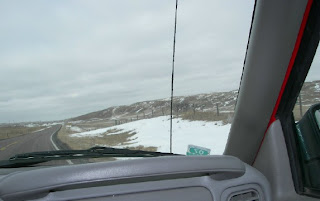 Below - could that be water?????  Yes, in the middle of all this open space, there is Lake McConoughey (I probably didn't spell that right!).  This is where the North Platte River is dammed by the Kingsley Dam, our destination.
I think this is it!  No one here, too cold.  We are BELOW the earthen dam, which is on our right - just a bit scarey when we remember those small quakes some months ago. 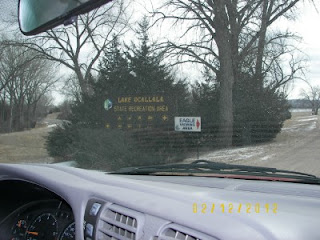 Below -- there they are!  I see 2 adults and 2 immature.  There is a small heated building closest to the bottom of the dam, where is was most comfortable for viewing, with several telescopes available, a small ladder for small children to reach the telescopes, tables and chairs for classes, and floor-to-ceiling windows.  There was no charge.  There were a bazillion birds were on the ice, in the water, flying about, diving for fish at the base of the dam.  Here and there we could see an eagle, swooping about, I believe it was trying to steal fish from the other birds.  The mature eagles are dark and their tail feathers in flight were white, so we could see them.  However, most were just sitting and watching, both the mature birds (black with white heads) and the immature ones, that looked really rough and motteley.  (That's motteley, not motley!)  This photo is as enlarged as I could get on my camera, so they are waaaay across the water, where no traffic is allowed, to keep them undisturbed. A young guy was there to answer our questions - employed by the Power District - he was not a ranger but he knew a lot about all the birds.
If you are in the area, it's very close to the road that goes over the dam, and easy to access, worth a short stop, although the eagles will likely NOT be there, but many other birds are here.  As we were leaving, several families arrived with kids who were thrilled with the whole event.

Occasionally I see a bald eagle on the way to Quilt Meeting, and they do show up here and there, especially around water sites.  This area is a major flyway for bird migration.

The drive back home was as exciting as the drive TO the eagles.  You might notice from the photos, that TRAFFIC is not a problem here.  We can cross this off our "to-do" list.  8-))
Posted by Elaine Adair at 5:23 PM 16 comments:

Email ThisBlogThis!Share to TwitterShare to FacebookShare to Pinterest
Labels: eagles


I have GOT to find my own "name" for this quilt!  OB just doesn't do it for me!  8-)  Maybe "Stubborn Determination" or "Forever Yours" or "Eternal Deliberation" ... you get my drift.   I am thrilled with the end result and satisfied with my own "stick-to-it-nive-ness."  End size is 82" x 92".  Thank you, Bonnie of http://www.quiltville.com/, for this mystery quilt.  And thanks also to Vic of http://victoria-carroll-parkhill.blogspot.com/ for her kind donations of black and whites when I ran out of my own.  Who knew that "running out" could even be possible?

One photo looks more blue, the other, more pink.  To me, it appears DONE!

My version looks a lot like other versions.  While I want to see the diagonals more clearly, for now, without any quilting, I see circular images with my bleary eyes.  One of the inside borders is sewn from the wrong side/direction - but I'll leave it as is, to add character - it's not easy to see in these photos.  And there is one pink block, safety pinned for identification, that is tilted the wrong direction, to be fixed.

Has there been any official count of how many of this quilt has been made?

Next quandry, how to quilt this baby.  I quilt on my own DSM, a Janome 6500.  And I probably won't get to sandwiching it (in the garage) until warmer weather.
Posted by Elaine Adair at 7:07 PM 32 comments:

Orca Bay is needing one more border on one side.  It's resting on my design floor - yes right in the middle of traffic.  LOL 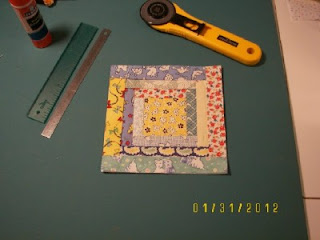 This is where I'm heading  - this Log Cabin version finishes at 5 inches, and I'm using scraps.  I mentioned to several of my friends that I was looking for "scraps with a lot ot white."  I got them!  Wow!  Donations added about 5 yards to my "Fabric Diet" calculations.  Givers were gleeful to have found a svictim uhhh ... home for their scraps.
First I sorted them by color - that made things a little easier.  Even though the block is not a traditional Log Cabin, I needed some effort at color choice.  I tried to use only 3-4 colors per block. 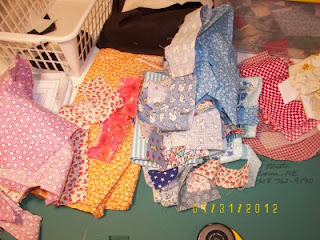 The magazine with the pattern (Fons and Porter) has been on my shelf for YEARS, wanting to make that little quilt. 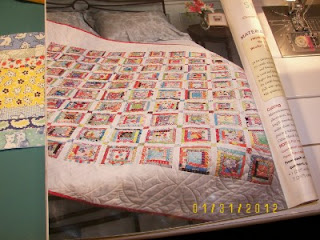 Here (above) is where I'm heading. 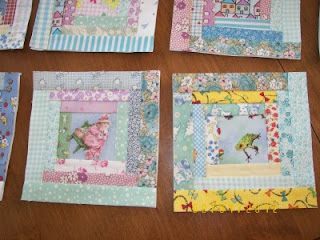 I discovered that a fussy cutting center didn't add anything positive to the busy overall appearance, so I stopped that. 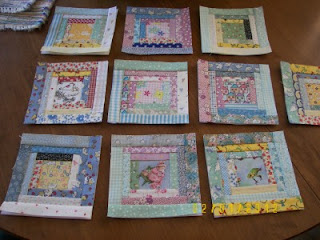 But they ARE cute.
If you have read this far, look carefully at my first photo of the single block.  After making 15 blocks, concentrating -- you know how paper piecing is, it's easy to get confused - look how the block is NOT right, and guess what - it is NOT me, it's the pattern!  I was wondering why it felt "odd" as I was sewing it together, but figured because it was being sewn the opposite direction from what I'm used to.  I copied the pattern (100 copies) on the copy machine, straight from the book.
Other than that, I'm liking it.  The blocks float on a backrground and sashing of white.
Now, I have to redraw that danged block to figure out what the "right" way is supposed to be.
﻿