Two weeks ago, I flew to my younger brother's home west of Milwaukee, for his retirement party.  During that time I also rented a car and then drove 40 miles south of Chicago, to visit old homes, old friends, old schools, old church - much has changed, both good and bad.  It was all a very rewarding excursion/vacation. This blog post includes photos for family purposes.  However, there IS one quilt photo included!

Since I currently live in a small western Nebraska town, with only 5 traffic lights, and NOT having driven in traffic in umpteen years, I was a teeny bit concerned with driving through Chicago, not being familiar with heavy traffic, and unfamiliar highways.  Brother kindly loaned me his GPS gadget, and while I politely refused, he fortunately convinced me to use it.  (I am too stubborn!!!)  I was happily converted to it's usefulness, and managed the drive relatively easily.  Thank you little brother!!!

This was one of the first quilts I made, for this now-retired brother, when I became obsessed with quilting.  It was from Eleanor Burns and would enjoy making another, in the same pattern.  It was so comforting to see it again, well-used and cared for.


The kids corner at the retirement party.  They had space to run around, play, and there was even one Kids Table of refreshments, just for them.  This party was arranged by his 4 daughters and one son - it was so lovely!  They did a beautiful job! 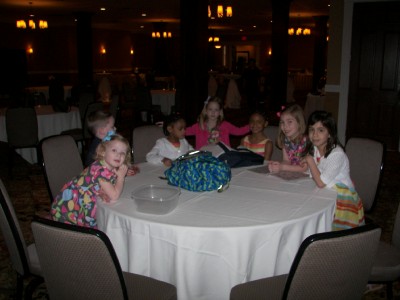 The gift, card table.  I'll bet there were over 100 guests.  People from the neighborhood, his church and many related to his hospital career came to show their friendship and appreciation.  It was all so touching.

My brother was shocked and humbled at the gifts, cards, letters of appreciation, fishing equipment (part of his retirement plan), and a LOT of gift certificates! 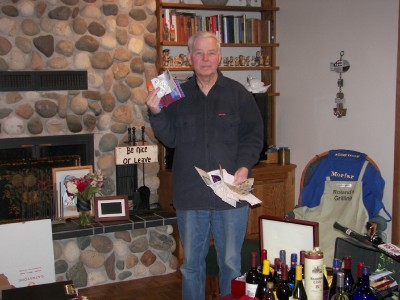 More of his "stuff".

His wife, also named Elaine, also enjoyed festivities with her big smile.  At the back of both their minds are the never knowing, "what will retirement be like?"   There are many projects on the "to-do" list.  Fortunately, he is clever and mechanically gifted and can manage most projects himself.

During my stay outside of Milwaukee, I rented a car and then drove south of Chicago, to see former homes, former digs, former schools, and church, as well as rekindling a friendship with a high school friend of mine.  While we've been visiting ala E-mail, we hadn't actually SEEN each other in uhhh 53 years.  We were both thrilled to find we just picked up where we left off and both enjoyed each other just like the girls we once were.  She and I drove all over old territories, looking at the changes.  Wow, there were a LOT of changes!!!  What used to be "rural" was full-blown TRAFFIC - UGH!

Here is my old grade school - the only thing that remains the same is that the word "Lutheran" is still used and it is mostly on the same physical location.  The building has been rebuilt twice ?? since I was there.  I recognized a member of my 5-student class on one of the Church Committees.

Here is my old church, again, having been rebuilt so I could not possibly recognize it.  At the corner is major traffic.  "it used to be" old country roads.  Now there is only traffic.

Here is my first house, now much enlarged, but looking unloved now.  There was an enormous amount of rain during my visit (remember hearing of cars falling into sinkholes in Chicago?) 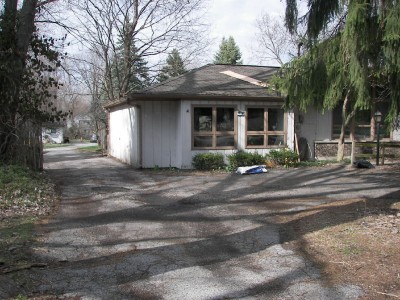 Next door, was a home where my brother once lived, purchased, needing attention when he moved in, looking very nice now.  The owners were outside, and remembered my brother, and also knew my girlfriend who was driving me on this expedition today. 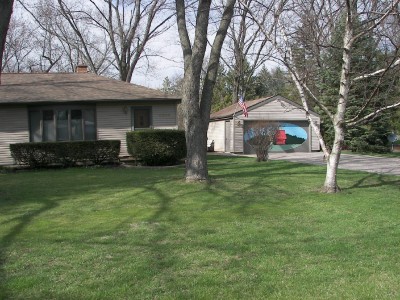 I used to live here (without the trailers, etc.) ages ago, and was happy to see it looked well-kept and cared for, with flowers and gardens.

When my folks moved from the farm, they built this home, still looking OK and cared for.  All was so dreary with the rain and storms and flooding, it was impossible to find much sun.


The last photo is not taken - that of whatever was left of my old childhood home, a farm.  I knew that trying to find it was going to be sad, but I could not even FIND a trace of it - not a tree, not the creek, not the grape arbor, not a rock that Mom had moved into a garden.  The area was filled with debris, trash, garbage, overgrowth, and apartments on one side, an unattractive strip mall nearby.  When you live on a farm, the earth becomes everything, life, care, love, hope, food, the future.  It wasn't there now.  I knew where it was supposed to be, but decided what I remembered in my memories was so much better, I didn't pursue looking farther - there was no point to a photo.

Here is today's effort of making blocks into rows of Jamestown Landing My Way.  Thanks Bonnie Hunter of Quiltville.com for this lovely design!  My version replaces the string units with the large blue and white HSTs.  As is frequently the case, some of the fabrics I used looked kinda "wrong" and weren't "matching".  As is frequently the case, it is THOSE odd fabrics that give it life.

Here is a close up of "odd" fabrics that add to the quilt's personality.  My goal is to do just one row of blocks a day - sometimes when pushing myself, it gets overwhelming and I lose enthusiasm. 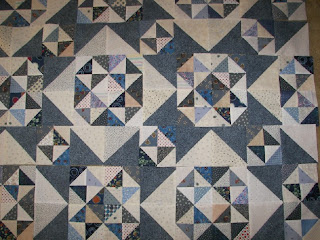 Oh great, I lost computer/phone power again - we have been struggling with our ISP over 2 months.  Today, phones/Internet has been ON and OFF at least 8-10 times.  However, finally the TVs work OK, after numerous calls, techs, and even re-wiring all the cables, yet the problem continued - bad or no TV reception.  They even replaced the buried cable, the "hub" on the pole in the alley, resulting in no improvements for TV.  Finally, I called another person, who "goosed" power outlet somewhere and that seems to solve the TV issues -- I am saying that today, tomorrow might be different.  The TV issues were the original problem.  However, we realize now, that the phones are out and we've noticed we're not receiving any calls - unlike normal traffic.  The Internet connection is also out much of the time, which I attributed (wrongly) to an old computer.  We realize now that it is the ISP and connections, not us.  We've been keeping a log for 2 weeks of issues and sporadic problems - I want to holler to someone, 'THAT'S NOT MY JOB!" to keep these logs!!!.  Yet another tech (is this 5 or 6 or 7?) comes Monday -- he said he'd call first - I had to remind him THE DANGED PHONES WON'T WORK - THAT'S WHY YOU ARE COMING!!!!    When I started this post, I HAD a connection.  5 minutes later, NADA.  If he does not get me fixed Monday, I am going to mention the name of the company - this is getting ridiculous.

On the other side of the studio ...

DH's latest boat building project is a replica of the African Queen, totally inspired by this gift of a hand tooled miniature steam boiler.  (Hope I am using the right terminology.)  This miniature steam boiler was made/tooled by John, a friend in Iowa - a master craftsman in his own welding shop. 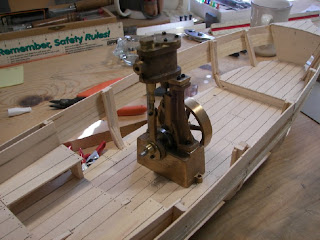 All those dimensions?  I'm not sure what they are for, but John and DH know. 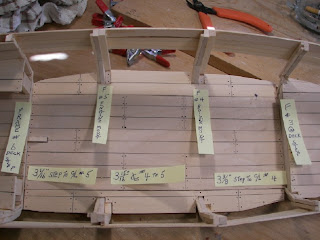 Sometimes DH starts with a purchased kit ($200-$300 or more!) and sometimes it is "scratch-built" - started from NO written designs.  Many of the kits are made in other countries, and often descriptions and instructions are curious, ridiculous and waaaay wrong.  Even kits need many more parts, ideas, calculations, tools, etc.  Each boat takes about 300 hours - like our quilts.  He couldn't sell them for what is in them, like our quilts -- they are only labors of love.  This project is scratch-built, but sometimes he can find draftsman drawings.  One time he had to order the entire set of real drawings, full size, from the manufacturer of a real tugboat, the original REAL tugboat made for my sister, and he had to sign legal documents he would NOT make a real boat from the drawings.  Of course, everything had to be rescaled.  Not an easy project to have plans for a 56 ft. tugboat, rescaled to an 18 inch model.

Planks and decking are added one piece at a time.  He has his own wood "stash".  Most of his tools are small, simple hand tools, and only recently, he added a small bandsaw that stays in the garage.

DH owned boats in San Francisco Bay and he is "in" each of his boats, knowing where all parts belong, are needed, and how they should be situated.  Talk about an escape!  8-))

(BTW, we are in DRY western Nebraska, the worst of the U.S. drought area -- far from water.) 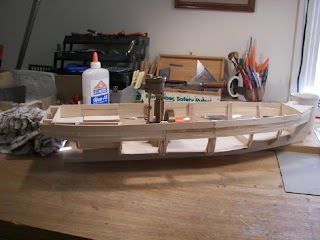 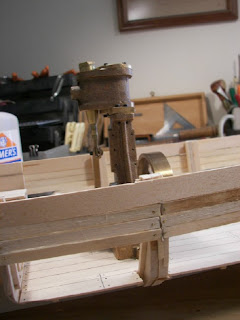 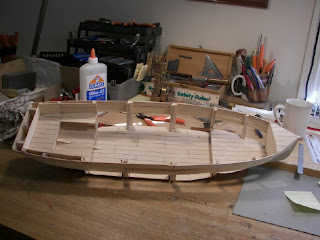 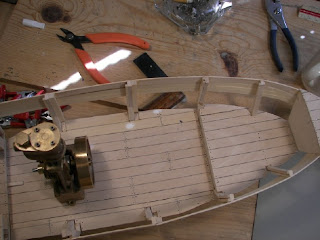 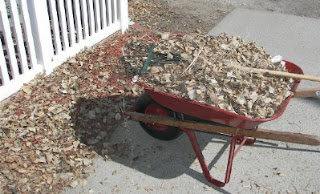 The sun has been shining, temps have been warm so I decided to move my winter body and rake debris off the garden and the yard.  19 trips to the "green" dumpster later and I found this tiny hope of spring - you have to look hard, there are tulips coming up in front of the wheelbarrow!  Yeah spring!!!  A week later (today) tulip tips are all over the entire bed.  Just doing some WORK helps me to feel joyful, but seeing the new growth, is always an extra PLUS!

And on the sewing/quilting front, here is my latest project, a version of Jamestown Landing from Quiltville.com, Bonnie Hunter.  Instead of the string blocks, I used large HSTs.  I counted the pieces, without border, and it's 2300.  I'm still sewing the last parts, the last HSTs that replace the string units. NONE of the units are together yet, unfortunately.  There are 30 stars in all.  My Design Floor isn't large enough to have all of them laid out.  Note that half the stars are "dark" (dark corners and centers) and half are "light" (light corners and centers).  Sewing them is not a big deal - just have to pay attention.  ALL the small HSTs units are the same.   I purchased the dark blue fabric for the large HSTs.   Other parts are all scrappy from stash.  You'd think a person would run out eventually, wouldn't you?

On a separate note, several weeks ago, a message popped up on Google indicating G would no longer support Bloggers, or was it Readers or ???, as of a particular date.   Has anyone else seen that message and/or knows what that meant?