Investigating into a closet, I found an entire box of red/white/blue fabrics, obviously forgotten.  There was even a book wrapped inside the fabrics.  For me, "out of sight, out of mind"!   (That also works in reverse when shopping!)   But I made this Log Cabin recently.  And I must admit to using that 8 in. Log Cabin Trim Tool, to justify purchasing it years ago, and frankly, I liked it.  Sometimes I get too casual and careless when sewing a simple pattern but using the Trim Tool kept me much neater, more precise.  My border finishes at 1 inch white, 2 inch for red, 3 inch for dark blue.  I use that 1,2,3 calculation a LOT for borders. 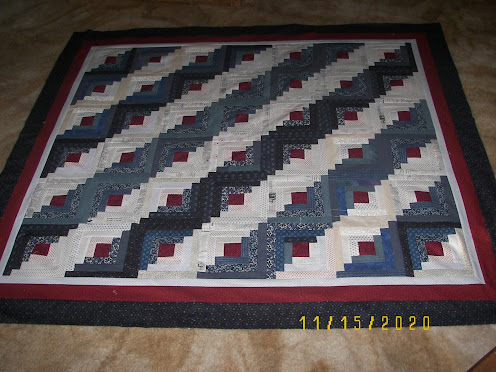 Stay well and safe, everyone.
Posted by Elaine Adair at 3:48 PM 10 comments:

Dishwasher would not open - it had already run it's cycle and I was planning to empty it.  Nope, would not budge.  No way to open it.   Handle just wobbles, ineffectively.  Me? lots of boohoos, swearing, etc.  Another unasked-for trial as a widow.

Finally searched YouTube, "Amana dishwasher won't open" and came on a bunch of videos, tutorials, one showed my same dishwasher.  He suggested a clever way to open it, and that worked.  OK,  it's open, at least I now have clean dishes and silverware.  Apparently this not an uncommon problem with this appliance. The video said I needed a particular kind of screwdriver/wrench that was strange sounding to me.   Groan, don't know what that is but got brave and went out to garage to poke around Robert's tools  Amazingly, there it was - all in one box, a very fine looking Craftsman manual screwdriver torque wrench, with a bunch of heads, all diff. sizes and shapes, stars, squares, points, etc.  I needed the "star" shape, very small to get off the screws in the dishwasher door that I had to be removed to access the broken handle part.  Of course I am nearly sitting on the floor, up and down, up and down, exhausting at my age, but I DID learn how to change the head, which way to lock the wrench, depending on if I was turning right or turning left.   It's a beautiful piece of equipment and looks unused. 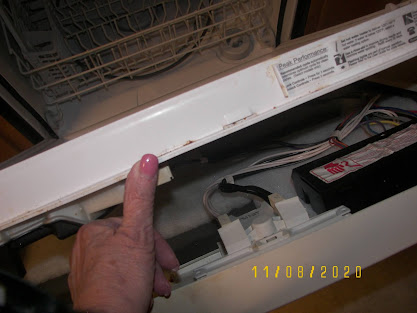 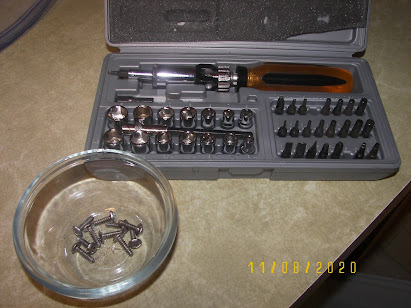 OK, found where I turn off the correct breaker in the basement when that's necessary, watched the easy-to-fix YouTube tutorial, found the site to buy parts, but that was confusing.  My dishwasher is 15 years old and part numbers change.  Found the almost right part, model, etc.  There are/were 7 diff. numbers I kept looking for.   After reading all the customer questions and reviews, I ordered the part they suggested even though it didn't match my current part number.  The comments even included several mentions of  "the video had more information than I think I need", just like my part showed, so I think it might work.  We'll see when it arrives!   It does look like an easy fix, at least on the tutorial  that featured my same dishwasher.  The hardest part was getting the screws out, but when I switched to a smaller, sharper 6 point head, it opened the screws easier.  (Getting up off the floor umpteen times was no walk-in-the-park either!)
As exasperting as this is/was, it was satisfying to follow the instructions, find the part, learn about turning off power, choosing the right little point on the Torque screwdriver.  I am patting my own head.  Robert would be proud of me and would  have patted me on the head in approval.  OK, now I'm boo hooing, thinking of him watching me struggle thru this exercise.
As my Mother would say, "My dear, just think of it as a learning experience."  😕
Posted by Elaine Adair at 7:03 PM 5 comments: