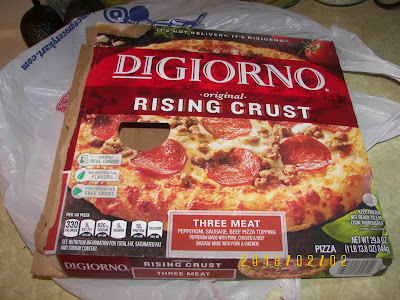 I am not too particular about what I cook, or eat, but I do prefer that my meals contain something called "FOOD".   DH is also not particular and he was just hungry for pizza so I tried something new.

How can such a horrible product end up at the grocery store?  On a scale of 1-10, DH and I both gave it a minus.  The "rising crust" was odd tasting - I can't even compare it to a "crust" or "bread"  -- it was even strange feeling to the palette, there was NO taste to the crust, beyond overly salty, and the topping was uhhhh, -- I couldn't eat it at all - again so  comprised with salt and who knows what else.  DH scraped off the topping from the crust and tried a few bites, but stopped at the second bite.   My action was just the same as his - into the trash it went.    No, I didn't read the label, but it was not out of date.  It did smell good while cooking.  I returned to the grocery store and requested my money be returned.  It scares me that such awful product is considered to be "food" and people actually purchase it.

We all need to speak up more loudly and return such awful "food" to the grocery store.
Posted by Elaine Adair at 7:11 PM

It has been a few years since I had a Digiorno pizza, but before celiac came into my life, it was one my family liked--that and Freschetta. I wonder what has changed?

I agree. The last one I had was way too salty and I felt yucky after eating it. I played around and learned to make my own crust and I think my pizza tastes so much better and I KNOW what I am eating. My grandsons love it too and tell me I make the BEST pizza.

My DH is on a pizza kick lately and bought some frozen ones. I won't even touch them. We have been spoiled for any pizza except from a pizza restaurant locally called "Mikey's". Their pizza is so good! While we were on a trip recently we had pizza at a restaurant in Colorado and it was horrible - tasted like cardboard! I don't know how they can stay in business - other than it is in a tiny town and is probably the only pizza restaurant there.

I have no idea what that tastes like...but I never will, thanks to your kind review...sounds yucky!!! We sometimes take French bread, scoop out the middle, and use the crust to make mini pizzas, and that is pretty yummy!

It really isn't hard to make home-made pizza, especially if you have a bread maker to make the dough for the crust. I do use a pizza stone from Pampered Chef, which makes the crust nice and crispy underneath all the toppings we load on. Two bonuses: great taste and you know the all the ingredients are REAL FOOD!

Oh my, thanks for this. Sometimes I'm tempted to buy a frozen one just to have it in the freezer for 'rainy days' but instead, we are buying two for one, or large ones at a pizza place, eating part of it and freezing the rest. 15 minutes in the toaster oven at 350 and it is better than it was fresh. I didn't have pizza when we went to Italy, but they don't use canned or frozen, just fresh food... which has forever changed the way I cook. Thanks again for reminding me not to give in and buy one of these!!

I make my own just like GrammyLou. Since I can't eat dairy, I do have with cheese for DH and half without for me. Have you ever tried to order a pizza with no cheese? I'm told that they don't make it that way. They don't, but I do.

No pizza in Japan... no real cheese in the supermarket so I guess I won't be eating any for awhile, frozen or otherwise.

I haven't purchased store bought frozen pizza in years. Even my husband who will eat about anything complained about them having cardboard crusts. I just make our own pizza's from scratch.