DH and I spent a few days traveling NORTH in mid-May, to Theodore Roosevelt National Park.  Our timing was good, no tourists, no traffic, but it was drizzly the entire time.  We were not hiking, just mainly doing a driving tour .  One item on my bucket list was to see "wild horses" and yes, we saw them. This park has two units, North and South with 60 miles between.  The landscape and geology are amazing.  Many bison were everywhere,  We saw several herds of horses in the South Unit.  We stayed in Medora, at the entrance to the South Unit.  This attractive town is very small, and they were preparing for influx of tourists.  There is an amazing Rough Riders Hotel, looking First Class, where you might "dress for dinner."  We chose the Badland Motel, and could not have asked for anything more - clean, modern, and looking quite new.  I think we were one of two guests in a place prepared for several hundred during summer season.

We chose this location because it was remote and rugged with a history of fewer visitors than other National Parks.  There were numerous, almost empty camping areas.   I had packed most of our food, but we had one good meal at the Little Missouri Saloon and Dining Room, where we left our signed dollar bill tacked to the wall with thousands of other bills with names and dates.

The drive to our destination took us thru northwestern Nebraska, all of South Dakota, and much of North Dakota.  We experienced NO traffic except for a wrong turn in Rapid City.  We saw huge expanses of Grasslands, oil wells, and herds of Black Angus.  One silly highlight was when passing  and slowing down to a crawl on the major highway thru a tiny town, was a police car with a "dummy" officer sitting in the front seat. 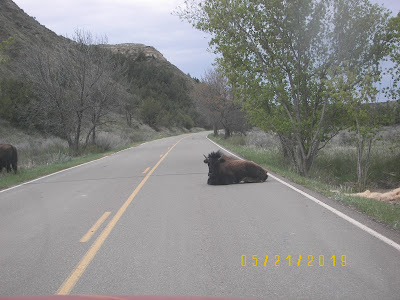 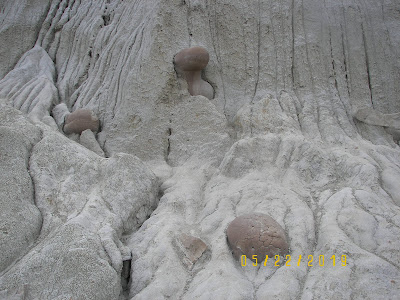 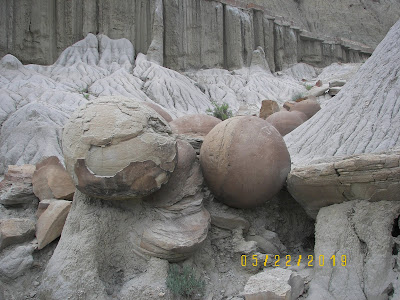 Those huge round balls are rocks, called "cannonball concretions'.  They are found in abundance in this particular ridge. 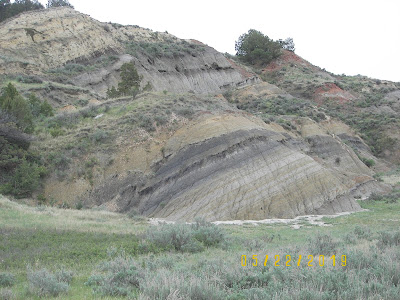 I LOVE seeing the geology.  Amazing views were everywhere. 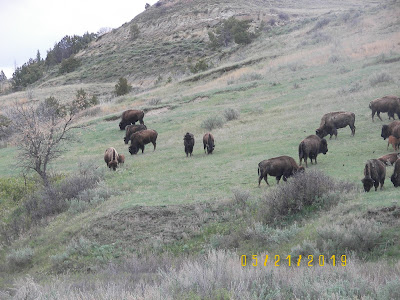 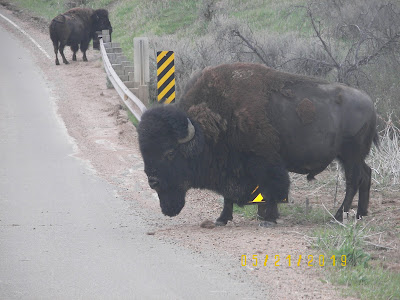 I could almost touch this big guy - didn't want to try. 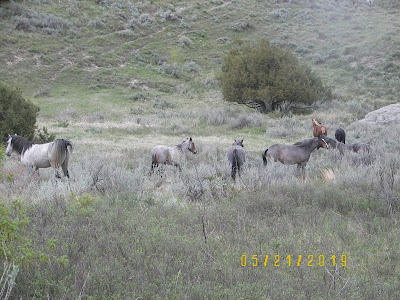 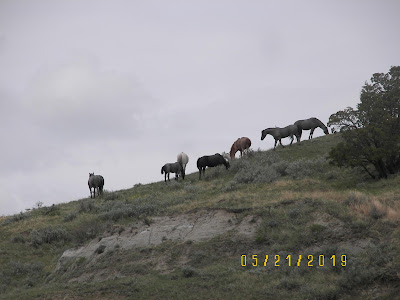 The wild horses are NOT running thru the grasslands, usually NOT fighting, no music in the background, but mostly interested in quiet grazing.  One stallion was definitely managing his herd, keeping order with various horse signals.  We didn't bother them, but kept our distance.

I redid the corners.  While all ended correctly, I DID have to futz and fiddle those squares on point, unsewing numerous seams and scanting them up on top and bottom.  Finally, I am near the "bottom of the barrel" from the original box of scraps, and I had to purchase the green border squares on point fabric. 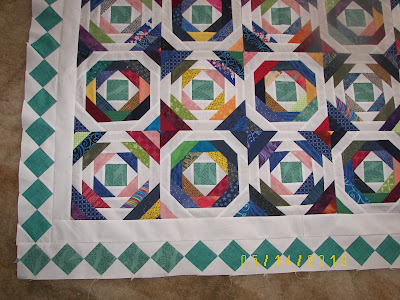 This is an example of a floating border (if you have never floundered through calculations) .  I.e., you have the quilt center DONE and you have the pieced BORDERs done and now have to figure that inner white border which frequently ends up a different width on top/bottom, different from width on sides.  I followed instructions from Gyleen Fitzgerald, and the FIRST things she says is "put your brain on the shelf and just do what the instructions say".  That is easier said than done!  after I second guessed, third guessed , ..... 12 guessed, and finally rechecked my own WRONG figures,  yes, if I had just followed her instructions, I would have saved a lot of anxiety.  Yes, get pencil/paper, measuring tape and calculator and do what she says!  This is the second floating border I've done using her technique, and it does work.

It needs another plain border, then binding, then DONE.  Notice there are 2 different blocks.

Here is another of the 6 projects from the gift box of scraps.  It looks a lot like another Pineapple Quilt I already have - probably because the fabrics came from the same LQS, just via different avenues.  Border is next - I had to use my own stash for the green border squares, and have run out but have another close match.   Hey, it IS a scrap quilt. 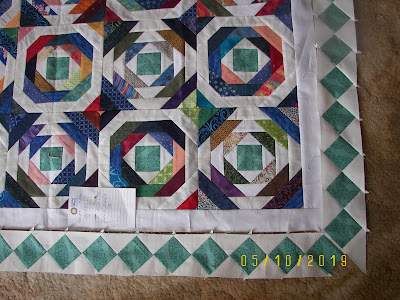 I taught a class once about blocks on point and diagonal measurements and the 1.414 multiplication factor, and a couple of the gals asked "why do we need to know that"?  These squares on point is why you need to know that.  I kept the size of the border square same size and value of the block center.  A neighbor's husband was looking at quilt of mine that had a clever border and I heard him say to his wife, "Look what she did!" and ever since then, his kind comment has encouraged me to try a little harder on borders.

Now I am facing forgetfulness for calculating the size of inner border when one has the center quilt top done and the outer border done, and how does one figure size of inner border(s) between them.   Ya can't jes go chopping off those squares on point, ya know!  The best instruction for me was from Gyleen X. Fitzgerald - but I don't remember them - must dig around my DVDs and relearn it.  She says, "Take out your brain and put it on the shelf, then follow these instructions, and don't think about it."   8-))) 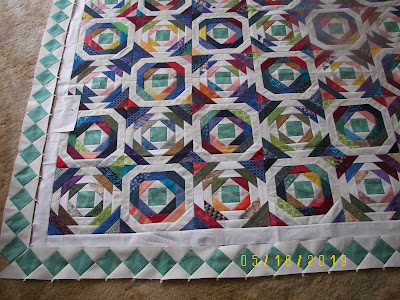 You can kinda see what the corner SHOULD look like.  The existing white border needs widening or removal.
Posted by Elaine Adair at 12:46 PM 3 comments:

This is quilt # 4, from the second Box of Scraps given to me some months ago.  I have 2 other quilts  started, not shown yet, so the box is getting picked over, and by now, I'm having to add bits from my own stash.  The inspiration was Bonnie Hunter, from her latest book, and she calls hers "Daybreak".  Since my fabric choices from that box are now limited, I named mine "Slim Pickin's".   I used scraps in my border where Ms. Hunter used strings.  Both ideas served the same purpose.  This has been the most fun I've had in years - don't know why, perhaps because I'm feeling very "connected" to those frugal ladies of years ago. 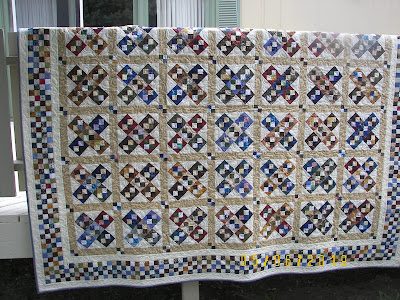 Most of the 4 patches are laid out same direction - a few didn't play the game.  8-))   They are 1 inch square, and the cornerstones are less.   I added fabric for the green/tan sashing and the last 2 cream borders. 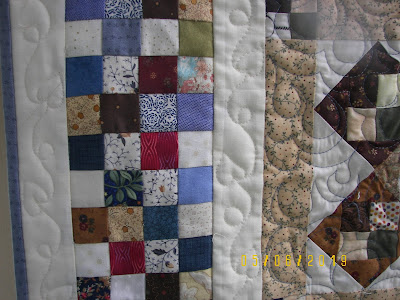