Building Boats on the Other Side of our Studio 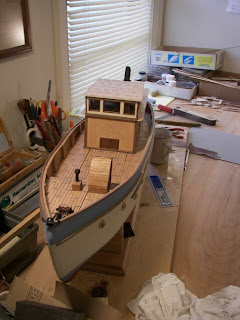 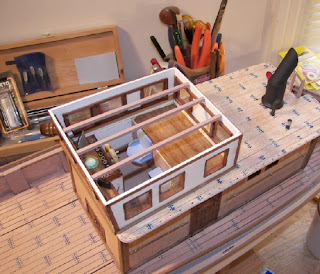 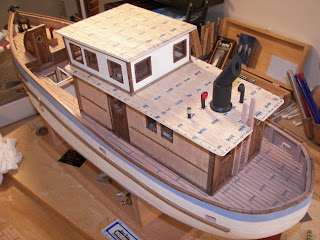 From time to time, I post photos of my DH's projects. We share a small studio in which we both work. Space is tight, but amazingly, we can both work at the same time in the same space -- it's kinda cozy.

He would LOVE to own a huge working boat - but remember, we are in the western part of Nebraska. Even the bass boat is seldom used because of drought conditions.

So, this is what he does while I am quilting. Instead of actually HAVING a real boat, he builds them, to scale. This particular project has over 300 hours in it. It's built from scratch, no kit, and he had to purchase the full plans from a boat building firm in St. Michaels, Maryland. He was also required to sign a waiver that he would not actually build a REAL boat. When the plans arrived, some of them were for a 52 ft. foot, and some were for a 56 ft. boat, so additional calculations had to be worked out. It's getting close to being finished.
Posted by Elaine Adair at 1:27 PM

And I thought quilting was a lot of work! Do you not have a problem with dust in a small studio when he is doing wood work?

Wow! Your husband does incredible work. How cool that each of you has a hobby that involves creating something beautiful. Do plan on making mini quilts for his mini ships?

What a great hobby! Your husband's work is very impressive.

Holy Moly - that's fantastic. What a pair you two are! And what a nice picture - the two of you sharing creative space; always having someone to bounce things of. Neat post!

What a great thing that after (I would imagine) a few years marriage you can still work together in a tight space. Tracey. Loved the luggage tags.

Wow, his work is as amazing as yours! It would be a disservice to call him a carpenter (I guess woodworker is more fitting), but I always think of quilting as carpentry with cloth instead of wood. Your interests are not dissimilar. Thanks for the glimpse of your studio.