We just returned safely from traveling 2200 miles north and west, through Casper, Wyoming, to Grand Teton National Forest and Jackson Hole, Wyoming, then on across Idaho to Roseberry, Idaho, where my husband's grandfather settled during the great migration west, in the late 1890s. DH has a cousin, older than us, who lives in McCall, a town near Roseberry, who he has not seen in 50 years, who is well-informed regarding his family's history, and talking with her for some time was our goal. There were a few skeletons in the closet that he wanted to learn about. The little town of Roseberry no longer exists, but some of the buildings have been saved. DH's grandmother once ran a hotel in nearby Donnelly, and we wanted to see WHERE it was. Unfortunately, there is nothing to commemorate that place's existance, except a new Post Office.

I KNEW the elusive Jackalope might show itself along the way, and HOORAYYYYY!!! SUCCESS capturing his image, before he skittered away. Jackalopes are well-known in Douglas, Wyoming. 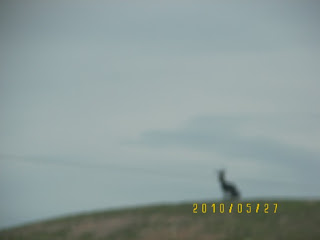 For those of you who might live in crowded cities, Wyoming has a LOT of space! 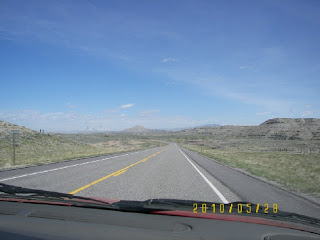 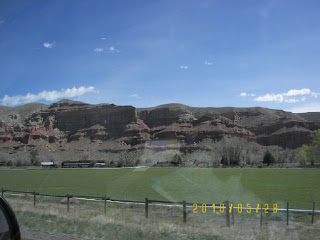 ... but there is the occasional problem with slow traffic ...

The first view of the Grand Tetons cannot help but take one's breath away! 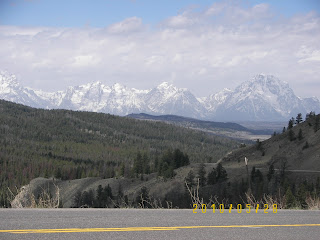 It was cold and damp with the threat of more snow. 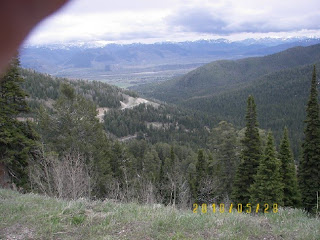 Oh Mercy - I promised DH I'd be very brave, wouldn't cry or faint, and agreed to ride the TRAM in Jackson Hole, up the mountain. Because the weather was so poor, the tram was not filled with the usual 100 skiers, and off we went with 5 passengers, into the clouds! 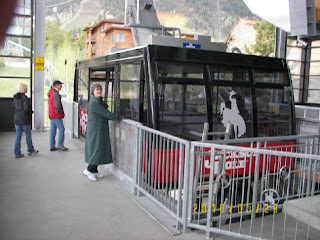 I DID feel faint, some tears of total fear trickled down alongside my nose, but I DID it! 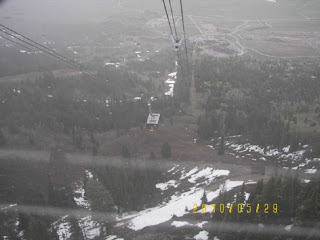 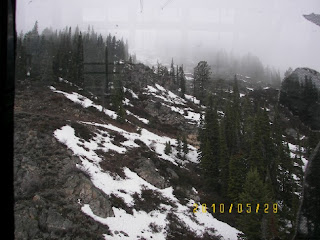 The only moose we saw on the entire trip was from this tram. I DID bolster my courage to actually look down to see the critter (not shown)!

The best part of the Tram ride was that at the top of the mountain where we got off, was a warm establishment under a LOT of snow, where coffee and Belgian Waffles were served - ya know, we'd gotten pretty cold on that tram, and I've NEVER tasted a waffle that good, served with butter and brown sugar, all messy and dribbling down one's chin. YUMMY!

I will be posting additional travel photos for the next few days for the benefit of family. Not much quilting going on, although I DID wish I'd brought my machine to stay occupied while DH watched TV Political NEWS! I am of the opinion that vacations should NOT include the life that one is leaving behind!
Posted by Elaine Adair at 7:18 PM

Thanks for sharing your beautiful pictures. I have never seen the Grand Tetons and what a site! I don't know if I could have made that promise to ride the tram but maybe, just maybe with waffles waiting for me, I might do it. I love family history, anybody's, very interesting. Nancy in WI

It looks like you came right through the Wind River Valley where I live. Your third photo appears to have been taken east of Dubois. Am I right?

Yes, Wyoming does have a LOT of space and very few people (thank heaven) to enjoy all of it. ;oD

Glad that you had a good visit and that you are home safe and sound.

Wounds like a wonderful trip! Yes, what different scenery from what I get around here. You photos are spacious and earthtones, mine are close and GREEN. I'm drooling for some waffles!

Wow, what gorgeous photos! I've never been to that part of the country, now I am longing to see those mountains! Please do post more, they're a pleasure to see.

I imagine it wasn't you taking the photos from the tram? You should have been told beforehand about the waffles, that's a great inducement to be brave!

What an exciting trip --both in the scenery and the family visit. I was in the Teton area 1 day 14 years ago. The grandeur of those mountains is stunning. A reeally big back yard sounds nice to me, but I'm not so sure about all that snow and cold. hmmm, have to think about that.

We were in the Jackson Hole area a few years ago and I was also impressed with the secenery. We didn't ride up to the top of the mountain though. I'd be nervous too. I'm terrified of heights.

The pictures are fantastic, but that tram.....! I'm afraid you would have found me plastered to the floor of the tram car, whimpering quietly. Do NOT like heights.

And, isn't it strange to go back to somewhere after a long time and it's simply...gone. My mom grew up in a coal camp in WV that has completely disappeared. Not even a building foundation left

Looks a bit chilly, but very pretty. Thanks for sharing.

Someday I'd like to see that part of the country. The Tetons are so stunning. Good for you getting on the tram and receiving your treat en route and at the end! The tram wouldn't bother me at all but there is NO WAY DH would go in one. Hope you at least had some handwork or some quilting mags to read while your hubby did his thing with the TV.

Beautiful photos; thanks for sharing. And bless your soul for getting on the tram. I would have been having a panic attack!

So glad you had a good trip. Thank you for sharing the pictures. I know what you mean about being in the tram. Wow! What courage you have. I probably would have fainted dead away before we arrived at the top!

I vacation at my sister's ranch in Star Valley. It is a lovely place. We have camped in the tetons many times.

gorgeous country. Horrible tram... not my idea of fun either. Your chunky churn dashes are looking great.

I've not looked at blogs for a while, and have missed out on your marvelous pictures. I agree, the Tetons are spectacular. Thanks for sharing.