Quilt of Valor, Pinwheels and 4-Patches 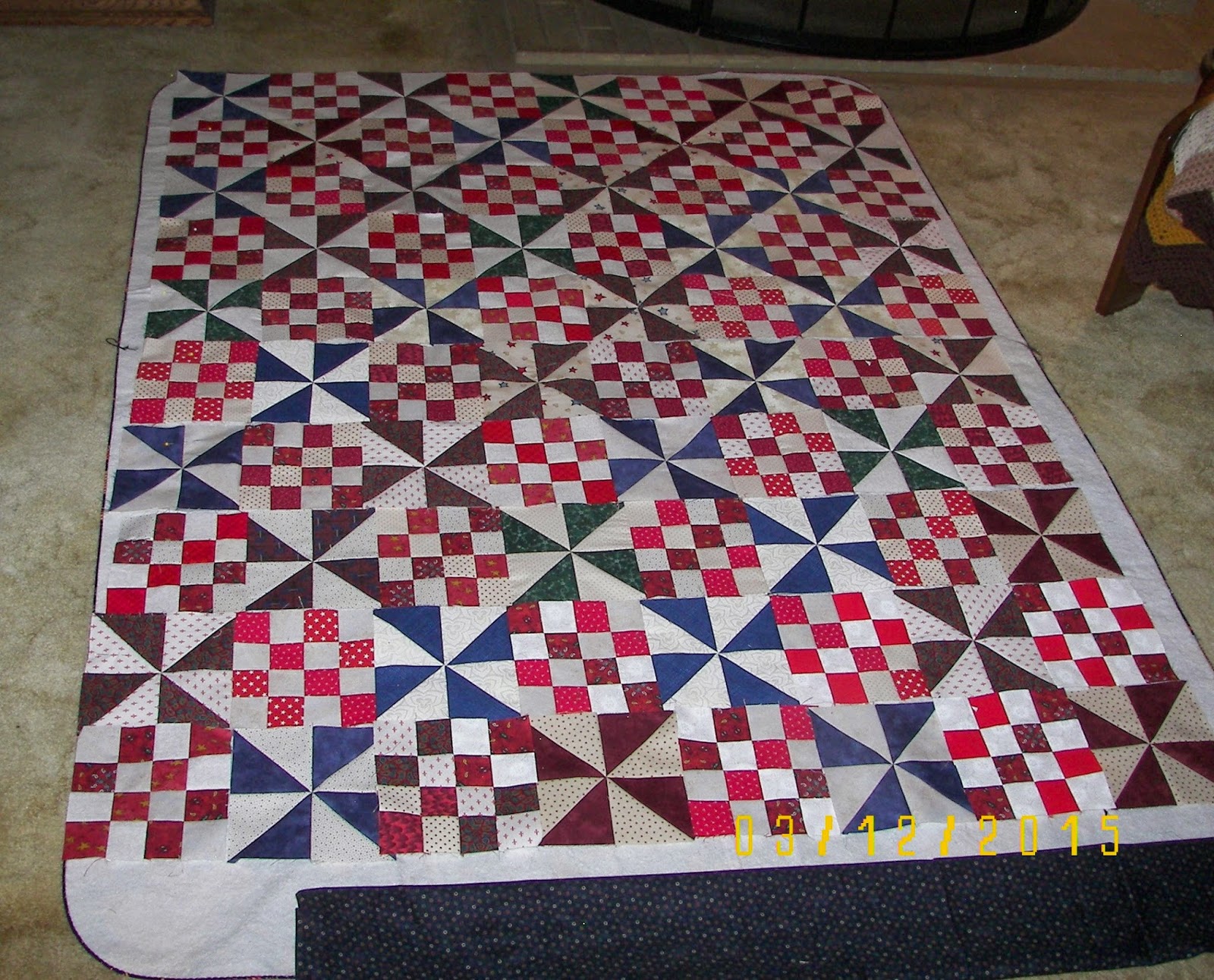 Most of the blocks are sewn together - I LOVE how the simplest of designs can turn into something so interesting!  I had too many green pinwheels and the quilt was looking a bit Christmas-y, so they were removed and a few more blues were added.  The white you see is the back of a flannel tablecloth.  Wow, what a nifty gadget!  I don't know why I resisted using one for so many years!"

This is from Quiltville.com originally, and Bonnie calls is Pinwheels and 4-Patches.  The rows of pinwheels must alternate, as do the 4-patches alternate, in order to get this particular "look".  This is my 4th or 5th version I've made.

If you choose to make this one - you might want to consider what I learned.   Originally I had some pinwheel blocks that were much darker and some much lighter and the graphic effect was not as pronounced as I had hoped.  Finally, I realized this graphic effect worked best when all the darker fabrics were a closer value, including the reds.

The dark blue shown is a choice for border but it's too dark - I have another lighter blue somewhere.    The border will be a band of white, then a wider band of blue, mitered at the corners.  Finished will be about 60" x 72".

Oh good, I might get this off my Design Floor this weekend!
Posted by Elaine Adair at 7:46 PM

Oh the person who gets this will treasure it. We have quilts of valor in Canada too. The soldiers weep when they share how much they mean to them. Good for you.

Thanks for the tips. I do like that quilt. Yours is lovely.

Great quilt. I made one from a different source years ago. It had way too many borders of all type but it turned out great even made completely scrappy. Update on my version of your scrappy rebuilt log cabin. I have all of my log cabin blocks made. 2/3rds have been cut and resign. They are on the design wall and I hope to finish the cutting and resewing today. They are going back into their box for a while as I have quite a few commitments to quilt for paying customers (wow!) and an antique quilt to work on for some one too. Thanks so much for sharing your tutorial. I really like how this one is coming along done in white and black with red centers.

Your quilt of valor is lovely. My group will be working on some in April.

A lovely day in store for Colorado today.

I appreciate all of the time and effort that it takes to make the layout of the blocks to take this picture of it. Good job, it looks terrific!

Very lovely! Someone will be so happy to receive this!

Such a nice quilt, love the colors
Greetings Gisela in Sweden

This quilt is so graphic and the design stands out great. You did a wonderful job coordinating all your colors. Playing catchup on blog reading so had several of your posts to read. Love that you have an owl pair close by - hope you have young to watch this spring/summer too.

Wonderful, thanks for sharing.

Wonderful, thanks for sharing.