Use up those cute blocks! 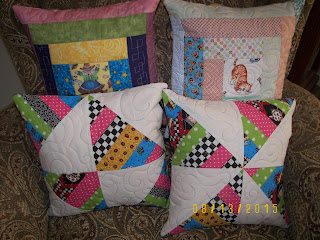 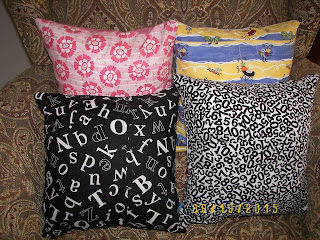 I was practicing my machine quilting, hoping recent repairs solved the issues, and decided to make  pillows as practice blocks.  At the last All Day Sew, Jody was using really BRIGHTS, for a quilt and kept bringing the trimmed strings to me, hoping I'd use them.  Well, I did!  Dig those two bright and happy string pillows!  DH said I should also show the backs.  I'll send the 2 string pillows home with her, and donate the other two.  They were fun to make, and I learned about Velcro on the backs.  I had the folds across the mid-backs and they tended to pooch out too much so Velcro was needed.

BTW, so far, so good with the quilting, but I DID use Sewers Aid to keep the stitches as nice as possible.
Posted by Elaine Adair at 5:01 PM

Fun! I'm a fan of the brights!

Pretty pillows!! Is Sewers Aid a silicone lubrificant for the needle or what? Hugs from Brazil

Bought a new free-motion machine quilting book today. I really like it and only have looked halfway through. It was only $9.99 for Kindle. It is Step-by-Step Free Motion Quilting by Christina Cameli. I love the layout and everything.

Are you saying that the motor replacement may have solved the issue? I surely hope so!

Cute, cute, cute!!! Thanks for showing the backs too!

Great way to use up those strings and strips! I ought to learn how to sew with velcro. I HATE putting in zippers on cushion backs!

Nice pillows. I made some for the beach house but they were beach print fabrics. I'm amazed at how easy it is to make pillow covers!

What great use of those scraps. I forget about pillows. Since I do not use many decorative pillows, I tend to forget that I can use some of my orphan blocks making pillows. Thanks for the idea.