Regarding wanting a computer geek ... I've not solved THE problem, but I HAVE learned it's not MY problem. Apparently Yahoo has made some changes. Thank you to those of you who suggested solutions.

Saturday, DH and I decided we couldn't stand being housebound any longer, and set out on a 2 1/2 hour drive to a dam, where eagles are found in large numbers this time of year. We've talked about viewing this spectacle for years, so Saturday WAS the day. Roads appeared dry, it wasn't too cold, although it WAS a bit foggy.

Two hours into the drive, we noted the temperature had dropped from 31 degrees, to 23 degrees, spots in the roads were a bit 'iffy', and there was a good amount of snow in the ditches - more than what we had at home. We are among the dinosaurs who do not have a cell phone, and as I mentioned in the past, once outside of town, we really ARE in the boonies. 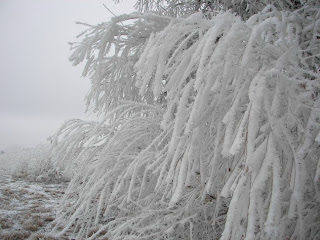 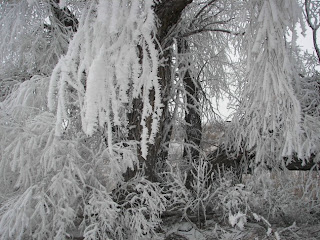 These are some photos of the trees -- the fog was getting thicker, and freezing. This is called Hoar Frost, and it was huge -- there is almost 2 inches on every surface. I've never seen frost so hair-y!

With temperatures falling and ever-thickening fog, we began to reconsider our safety, but pressed on, wanting to see those eagles. It was possible, that if we slid off the road, we'd be lost in the fog, and may not be found for some time.

Finally, it dawned on us. We couldn't see 100 feet down the road. How on earth could we possible see eagles? Duhhhh. So, back home we went -- disappointed for not seeing eagles, but glad to be safe and sound, and still had time for some sewing.

Even though you didn't see the eagles, the drive was worth it for the frost. It is gorgeous.

The frost is gorgeous. Too bad you didn't get to see the eagles though.

I don't have an answer to your Yahoo problem. Have you tried just sending an email to one of the problem addresses? Perhaps the email will go through that way.

Your photos are beautiful - the eagles will be there another time, but probably not the frost!

I am glad I wasn't in it - but those are beautiful pictures of the frost. I don't think I've ever seen anything like that.