DH and I were watching yachting races on TV over the weekend, and I was reminded of days ago, when my free time was consumed with sailboats, and not quilting, although I already had a stack of quilt UFOs. Hearing the sounds of those yachts groaning, as they tacked or "came about" made me a little heartachey. I am now 10 years older, and probably cannot skitter about the deck as I once did, but still ... it was fun while it lasted.

The sailing club organized many races, with boats of various sizes, and many of the races would include ALL the sailboats, large and small. The scramble at the starting line WAS exhilarating, frightening and incredibly impressive. A starting line for a sailboat is not a fixed thing - sailboats have to be moving as quickly as possible when they cross that imaginary line. Large sails steal the wind from the smaller boats, leaving a smaller boat suddenly without power or "weigh on" .. and you really must be moving in a sailboat, or else you are powerless. The rules of the road mean that boats on starboard tack have rights over those with port tack, so if you are on port, you must give way to those on starboard - drat! And the wind is sometimes fickle, so the best of plans may not work, but you only realize that when half-way through your strategy. The "dirty air" at the starting line results in surprising wind currents -- there were not a few folks hollering, swearing, yelling, screaming, and even gasping when near-collisions occurred. The worst part about a collision is not the damage, but you would loose points, or have to go a round again - not good. And if you lose a crew member overboard, the rules say you have to pick that crew member up, taking more valuable time. It was a BIG no-no to fall overboard! Never mind that you might actually be in danger - you were in more danger from the captain of the boat from which you fell off! Most of the time, we all survived, with stories to tell, over glasses of wine, and congratulations exchanged later at the clubhouse.

I made this quilt to suggest that starting line, "Regatta Scramble." 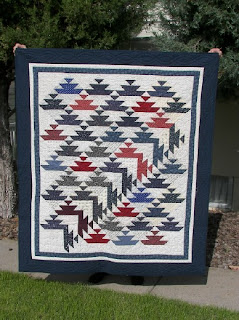 I must admit, I'm getting a little bit tear-y remembering those thrills.
Posted by Elaine Adair at 8:31 AM

I love your story. Gorgeous quilt. I love quilts with stories behind them...

Omigosh - you got to me too. I grew up on, under, around and in boats in Southern CA, and reading your entry I can just smell and hear everything. Makes me want to dig out the Dockers and go get 'em crusty again! Our Captain Dad had a rule - if you fell off at the wrong time, you had to jump off at another time of his choosing!

It sounds like a lot of fun (though I think I would find it quite frightening) - the quilt is a great reminder.

DH is a sailor and loves to race with his son. We share ownership of a J28 with he & his wife. As for me, I'm a crusin' type of girl and don't do the races. I don't like the 'too hot' or the 'too cool' weather or the rain...I'm just a picky thing. But when the weather is really nice and no rain in sight I'm up to a daysail. So DH has been taping the races so he can share with his son who at the moment is temporarily has no cable connection. When DH takes me out sailing you can bet he's racing with someone out on the lake though...he's the captain, I'm just the first mate...at the wheel. But at least I've never been overboard, and he has...

It's me again...as I re-read what I just wrote above, I realize that I should have re-read it then and corrected all the goof-ups in the composition. Too late though. :)

Wow! And I've never even been on a sailboat. Life on the prairies.

Wow, sounds exciting and scary! I'll bet you have many great stories and a few trophies too.

Oh Elaine! I love this quilt! Partly because of the story and memories, but in general just because it is so beautiful and traditional with just a bit of "fun" to make it exciting!

Are you enjoying the 1000 Days at Sea blog? I sure am, and I'm not even a sailing enthusiast!

Surely your sailing days were not in Western Nebraska, US. It sounds like a Great Lake, the Gulf or an ocean. It sounds wonderful wherever.

What a wonderful memory -- I've lived near large bodies of water (ok, so I'm in a cornfield but I live less than an hour away from a REALLY big lake. Lake, inland sea, take your pick on the name) all of my life and have never been sailing. Something to add to my "must do" list.

Your quilt is lovely -- and from what I've seen on TV, really does capture the feeling!

I've been witnessing sailboat races out on Lake Michigan for 40 years. The description of your experiences just added a whole new dimension to watching them from now on. Thank you.

Wonderful story and wonderful quilt. Thanks.