Finally, back to Quilting! And, QSTs 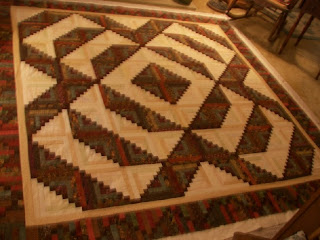 Quilt Guild show is coming - wonder if I can get this quilt DONE! (photo kinda fuzzy).

I had to actually HIRE a helper to get this sandwiched and pinned as my knees are still hurting after my nosedive! Wow - talk about reality of getting older! Thank you ALL for asking about me - I had more comments than ever before, but I gotta admit, I still don't want THAT accident to happen again.

But, my helper (14) was thrilled I had asked her and ya know, one never knows where the next quilter might come from.

This quilt is 88" x 88". I LOVE my border, where the cornerstones continue around the 'cabin', something like a fence. You can vaguely see a dark trail of border cornerstones in the photo above - that's what I was wanting -- "vague". I had to re-do all four sides in the very center, where they met -- apparently I sewed them on different days and had solved the issue differently each time. I was firm with myself and redid each center.

(If you have never made a border where a small unit HAD to step around your quilt exactly, start at each corner and work toward the center of each side. You may have to fudge creatively at the center.) That's my tip of the day. 8-)

As many of you know, I love PatsyThompsonDesigns.com DVDs for learning to machine quilt on my domestic sewing machine. I watch them over and over, and enjoy them better than anything on TV! I also greatly enjoy my ThePamajaQuilter DVD, who has a different style, but is equally talented. 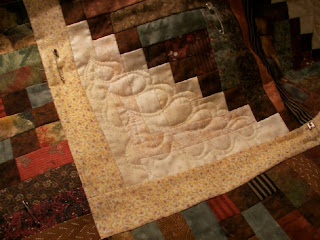 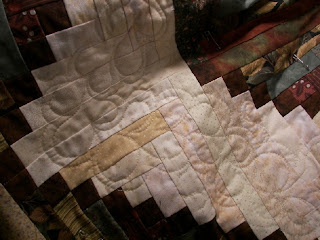 Next subject is Quarter Square Triangles. (I am going to assume you all know this method where starting with 2 squares 1 1/4 inch larger than finished size. Sew diagonally, press open, then put them together again, and sew another diagonal line -- not a precise explanation but ... ) I had to make a bunch and wanted to sew them together in a row. I 'spin' or 'twirl' my seams on the back to eliminate that bulky center, then press them in one direction, clockwise, or counter-clockwise.

So I picked them up, willy-nilly and was struggling wondering why some of the unit seams butted together, but not others. Duhhhh. (Lightbulb moment!) If you make your QST as stated above, HALF of them will spin one direction, and HALF will spin in the other direction. If you separate them into 2 stacks, 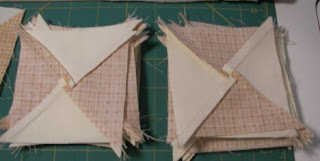 all the units in one stack will have seams and butt nicely together no matter which way you put them together (below photo), and other will do the same. I'll bet many of you know this - I didn't! Sure made sewing them together easier when I learned the trick. 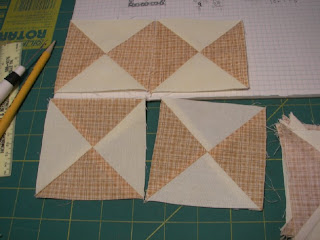 Your quilting is getting better with every quilt you do. Those feathers are great. And I like the pattern on your quilt. I hope you do get it done in time for the show. That one needs to be seen!

It's beautiful. I love how you have been.
mireia.

Wow this is going to be so beautiful. Love the color combination. Can I ask which PT DVD's you have. I have been to her website before, and have been a little confused with her offerings. She says one DVD is like the other, but I don't really know which one to start with. Being a visual hands on learner, her DVD's would be very helpful.

It's beautiful. I am a great fan of Patsy Thompson's quilting. I follow her blog but am thinking I need her DVD too.

Mmmm... lovely log cabin. I have 2 of Patsy Thompson's DVDs and love them. I have been watching them a lot more recently because I have a stack of tops waiting to be quilted.

Ooooh that is so pretty! Love the quilting!!! :)
dawn

Good tip, Elaine. And your quilt and quilting are lovely!

The quilt looks great from here. Glad that you are recovering well!

Glad you are feeling much improved. Dont like the fact it takes longer to recover as we age!
That quilt is just beautiful!

Beautiful design, beautiful colors, beautiful execution and beautiful quilting! It's just lovely. Good work indoctrinating the next generation of quilters - she may think she's just doing it for the money, but maybe quilting will get under her skin...

Nice tip about the quarter square triangles. If only I was so organized...especially about twirling the seam allowance in the center. That maneuver tries my patience.

This quilt is beautiful - can't wait to see it finished. Your quilting is really nice. Hope you are healing from your fall.

Elaine, I'm glad to see you are blogging again after your month of woes - computer and nosedive. I visit your blog often and truly love seeing your beautiful quilts come together. I adore that log cabin quilt!

What I wish is that I could come and just sit at your side and watch you quilt on your domestic...that would be wonderful! Your quilt is wonderful too!

Those feathers are great! Quilt show deadlines really light the fire under us don't they! My guild has a show in October...yikes!

Log cabins are a favorite of mine -- your quilting looks great!