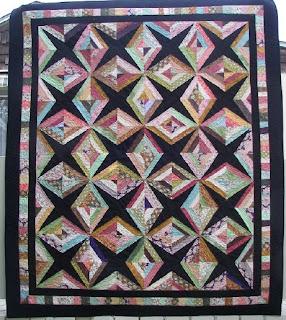 This is just finished this morning, after taking out 4 blocks of quilting in the black.  I had several events of poor tension, then poor thread choice, and twice I didn't like what I'd quilted, so for now, there is NO quilting in the black pointy parts.  The backing is light, while those black zingers caused a LOT of show-through, or maybe you call them "pokies".
This quilt is a little bit more vibrant than the photos - it IS vibrant!
For months, I had been slobbering at Amazon.com over  a book called String Revival, and this was the cover quilt.   Wow, I pressed my clicker so fast whtn I saw it!  It was backordered for MONTHS!!!  In the meantime I prepared my fabrics, foundation paper (phone book pages), already had my strips cut, so when the book FINALLY arrived, putting it together was a snap.  The black starts as a template that come to a point about 1/2 inch inside the intersection, so it's on target every time. When the book arrived, it included 30 minute DVD as well, with some video of making 3 of the projects.  THAT was a nice surprise. 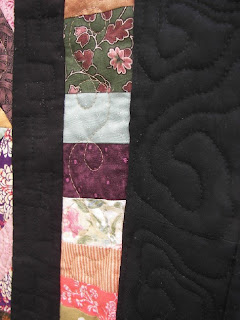 I quilted the borders differently.  The first inside border was a geometric squares/rectangles, the next was loopy with occasional flowers, and the last wider black border was a kind of innie/outie replicating (IMHO) what I had done in the interior.  This approach adds to the scrappiness and also helps to keep up my quilting skills. 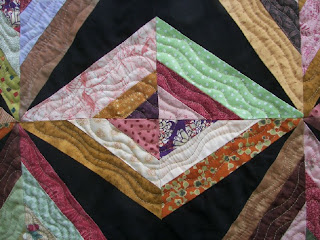 I love string quilts, the are always fabulous!

Wow! This is awesome quilting in the diamonds (and the rest, too). I love this pattern, and especially your use of black. Beautiful work. Thanks for the eye candy.

The two sisters who wrote this book spoke at the recent Wisconsin show that I attended. They had some innovative ideas for string piecing, and showed some really cool quilts from the book. Their book was on backorder even at the show. Love your quilt. They are really fun to make, aren't they?

Fantastic finish! Is this one you're keeping? Looks wonderful. Your machine quilting always accents the quilt so well.

It is gorgeous! I checked out the book on Amazon and it does look like a wonderful book. Connecting Threads has it on sale for 40% off. I guess I will have to add it to my list. I really don't like to buy too many books, but might have to get this one.

Are you keeping this one or is it a gift?

Oh my gosh! It is wonderful! I love it! I need to get that book!

OMG it is sooo stunning. Thanks Ruth (commented above me) with news that Connecting Threads has it on sale. I'm going to go have a look see. This can me something I could use those pesky scraps for. Your quilting is great. I've been trying quilt on my DSM as well.

Hurrah! Bravo! It turned out wonderful. Mine is still languishing in the TBQ pile (to be quilted).

This is LOVELY! If you still feel that you need more quilting in the black points, how about just a row or two of straight lines radiating out from the points? You could either use black (or are you DONE with black on black!?), invisible, or as Carla Barrett (quilt whisperer) told us at a recent class: burgundy or a dark color. I'm up for trying that last one next time I'm faced with black!

You do inspire me, Elaine! This is a quilt I need to make some day! Thanks!
Louise

Elaine, this quilt is striking! I had heard about the book, and now I am drooling over it -- and with a DVD too!

I'm so behind with blog reading ... but still wanted to say what a great quilt you've made. I can see why you fell for this one! Great quilting and I agree the outer border totally echoes and compliments the inner area :)