Out in Left Field, and Earthy Stars DONE! 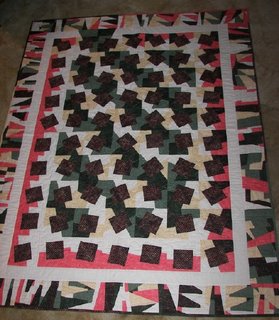 Out in Left Field
This quilt is from a pattern where you make the blocks oversized, then chop them to size – this procedure definitely appealed to me - so much so, that I made 3 others within several months, and then gave a workshop for our quilt guild. For whatever reason, this one reminds me of a baseball field, hence the name.

The blocks are oversized, then trimmed wonky, with a 6 ½ inch square ruler. Everything that is trimmed off is later put back together on a separate border, which is machine quilted heavily, and THEN sewn back onto the quilt. I LOVE all the various shapes that show up in the border - there is no predicting what the quilt will look like, until it’s done! My kind of quilt! I LOVE the surprise aspect.

This is a “Confusion Quilt,” by Debbie Bowles, of Maple Island Quilts. The first time I saw her on Simply Quilts, I ordered the pattern the same day - her example electrified me with enthusiasm. When it came to choosing fabric, I had to trust her judgment with lights, mediums, and darks because I absolutely could NOT imagine the end product. While it was not technically a ‘mystery’ quilt, the end was going to be a mystery! What fun this was! 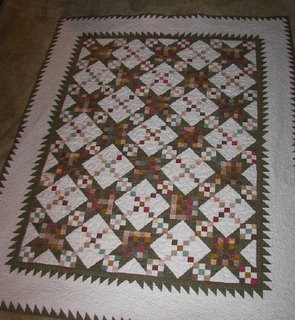 Earthy Stars DONE!
I showed this some time ago, as a WIP, and it doesn’t look a whole lot different, except that it’s done! Those double rows of HST were not easy, since they had to line up exactly across from each other. I had visions of hand quilting this project, but my time ran out, and it’s a gift for someone who will not know hand quilting from machine quilting, so... machine quilting it is! I might still make another one, hand quilted, for me ... oh yeah, I already have over 50 others in the house, for me ...

I am still having problems figuring out how to modify borders such as this (the plain light border), when the last row MUST be a definite size. Something about measuring the width of the quilt (finished or unfinished?), divide by 2, and then my eyes glaze over. I’ve only been quilting 25 years, you would think I could soak that solution into my brain. Note my ‘creative’ center in each HST on the 2 borders – another one of those ‘I shoulda planned better’ moments.
Posted by Elaine Adair at 5:47 PM

The more I look at your "Confusion Quilt" the more I like it. It sounds very intriguing and unique!

I am glad that you gave the pattern source, Elaine as I was racking my barely awake brain trying to figure out just where I had seen the premise of your quilt.

Well done and I can see where you don't control the outcomes on the "Confusion" quilt. Quite a contrast with the more traditional "Earthy Stars" Isn't it fun to try new things even after 25 years of quilting?

WOW -- I love it! Thanks for sharing the pattern name. This looks like a lot of fun to construct.

OOhh my Goodness. I LOVE the quilt!!! You said that you have done it in different colors. I love to see the others. Do you have the pattern from a book ??
This is a great class.

THe technique on "out in Left Field" sounds fascinating. The results are interesting too. Whack it together and trim to size sounds just like my favorite kind of quilting. Earthly stars is also beautiful in a different way. You show a lot of versatility in these two quilts.

Wow, I love BOTH of those quilts and they are so different from each other! Great jobs!!!

Love the earthy stars quilt. It was worth lining up those half square triangles!

I really love Out in Left Field. Post the name of the pattern if you can. It is really neat! I was also looking at all your x-string quilts. That is one of my favorite scrap patterns. I have made a lot of baby-sized ones for charity.

Wow Elaine - 2 beautifully done quilts, and so different from each other! I don't know what impresses me more; that you're so good at both, or the fact that you made what - 80000 hst? AND matched them! You're my hero!

What a wonderful star quilt - love your borders. Just stunning!

All of these quilts are great! My absolute favorite, tho , is the Earthy Stars. It's wonderful!

Oh I LOVE those earthy stars! Now that is my kind of quilt!

I love this quilt! Of course I do - it looks like it has 1000s of tiny pieces, which must be my downfall when picking a pattern... but the end results are always so worth it. Your version is really lovely!

Well goodness - last night Beta wouldn't accept this comment and I kept trying and trying - came back again this morning to try again and I see that it went through 4 times... got to love modern technology!