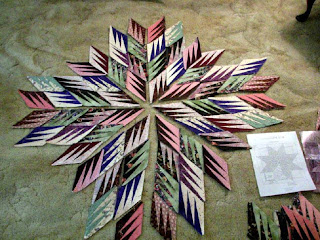 I've been working on this project for several months - taking my time. It's a Karen Stone pattern - and I LOVE her designs. Her color sense is exquisite! This one is called An Unusual Lone Star.

I've seen this design made up in total scraps -- very effective -- each diamond being 3 strips of one color and 3 strips of another color. All the strips are pre-cut at 1 and 1/2 in.

It is paper pieced, and the sewing is not difficult. Actually I was getting a little bored with the piecing part, as there are only 2 blocks. The pattern itself is wildly chaotic, and for my fabrics, I chose purple-y browns and pinks and muted green, with some beiges, corals. If I did it again, I would rethink my choices of fabric location, and might make them radiate from from the center rather than what I did.

I made 4 of each color choice thinking that when I laid them out I would space one of the 4 in each quadrant. Looking at my nearly completion project, I believe that added to the chaos, but then I DO like the wildness of it. To me it looks like a Canadian Thistle that my Dad paid me one cent each, to chop down!

There are 128 diamonds, so I have a way yet to go, as far as laying it out. My diamonds are mostly made, just not arranged. The arranging part drove me up the wall, especially when I stepped on the arrangement, misplacing my methodically placed diamonds, and then panic almost took over!

The corner fabric (yet unchosen) should help 'hold' it together. Then there is another narrow border (dogtooths teeths?, using scraps from center diamonds) and a final border. I think the borders will calm it down a bit.

One problem to watch for, if you make this design. My DH and I had argued an hour over deciding how to lay it out per instructions, and we finally had to call it a draw. Funny, HE absolutely could NOT see any color order, and I absolutely could NOT see architectural format!!! (talk about Men from Mars, Women from Venus!) However, to our surprise, we noticed the two illustrations were NOT the same! The cover photo of the project is NOT laid out the same as the included instruction drawing, and we were each looking at our separate illustrations! And to tell you the truth, I'm not sure it mattered since the design is so over-the-top. And my careful balancing of colors? Again, I'm not sure it makes any difference, and several times I was lost in the layout, and was tempted to just plop anything anywhere, but after a glass of wine, I was able to calmly relocate the pieces to their 'proper' location.

Also, if you make this design, and if you want to maintain a particular order, you will definitely need a space to lay it out and leave it in place until you get each of the 8 diamonds assembled.
Posted by Elaine Adair at 8:08 AM

It will be gorgeous no matter how you plan to lay it out. It looks incredibly complicated but I guess that's the function of paper piecing. What will you use in the corners?

Wow! Can't wait to how this ends up.

I really like the 'wildness' of this design - well worth the (considerable) effort to make it.

Wow, Elaine, that looks really complicated! What patience you must have!

Elaine, I love the look in the photo...very modern yet traditional at the same time.

What an achievement! It is going to be very spectacular.

You are a better woman than I!!!

This is amazing. Gotta love that paper piecing.

Elaine, your star is simply gorgeous!
I love the way you chose to use your colors. It will be a stunning quilt.

That looks wonderful! I have Karen K. Stone's book and am working on one in it, but the lonestar is definitely on my list of quilts to make. Right now it is too intimidating, though!

This is totally stunning so far! Your far braver than me!

I love your design in your fabric. It adds a whole other visual texture to your star. I can't wait to see it complete. Thanks for leaving a comment on my blog. I thought that might be a grosbeak bird, but, I couldn't find any pictures with that color marking. The beak fits though. Thanks!
Very interesting blog!