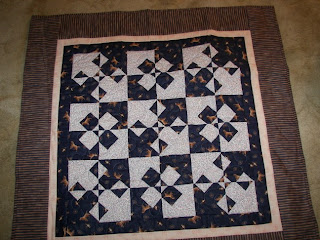 This little quilt is the result of whacking my 9-patches. There are 9 blocks in this little quilt. Although it's difficult to design an original quilt block these days. I think it MAY be an original! Since I designed this block, I've seen more ideas in print, based on making a large block and then recutting it.

The second quilt is also the same pattern. I showed it at Guild Meeting and so many people asked about it, I gave a class, which produced an abundance of MORE ideas. As a sample, I brought in some of my 'mistakes' and some of the gals ran off with that idea and made even better blocks!

With the second quilt, the first two rows are set correctly. The last two rows have several of the blocks set in the wrong order. I did not even SEE that now-glaring error until AFTER the class, AFTER I had class-flyers priinted up, and AFTER it had hung in my living room for months.

The back is simply using up, what else, scraps, in a large log cabin design. I like it! 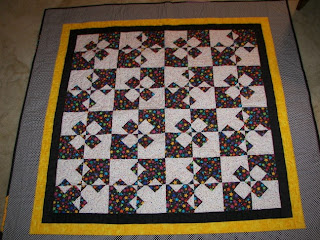 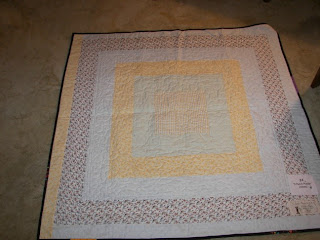 Hi, I've been playing with new ways to make blocks on my blog as well. I love your original, so do we get a tutorial or do we go to the class! It did take a while to see the error and then you wonder how you missed it!
Re: Kids quilts. Some of my ones I have given away haveb;t held their colour. There were two in particular, they were brights with chain store fabrics AND they were used as baby mats and virtually washed every week. At least they were used!
Cheers, Tracey

That is "haven't" don't ask me how I made that new word! Tracey

I actually like the "mistakes" on the second one becauset he secondary pattern is arrowheads. It's amazing how we can look at something for ages and not really see it. The pattern is so complex though, that I'm sure I wouldn't have noticed it if you hadn't pointed it out.

Oh I LOVE it! You need to show us how to get those block on your blog! I love the design it came up with!

Elaine, What a great quilt! I know someone from quilt retreat who showed me how to cut a nine patch and transform it into so many different designs. (I haven't tried them out yet but in the future maybe...) Yours is really neat. I always enjoy reading your blog! Connie (was Conni Lu but I changed the spelling to my 'old' way)

Elaine, those are wonderful quilts. I would be interested in knowing how you did the cutting from the original nine patches.

I love that block design. It is truly stunning.

I love your block design! What fun to just cut up blocks and do some rearranging! I'm also a big fan of pieced backs -- it just seems to make the quilt just a bit more fun.