Other Side of our Studio

From time to time, I post what my DH is doing on the other side of our little "Studio." Usually his projects are boats, but this wagon appealed to him.

This is a Conestoga Wagon and literature says these wagons originated in Pennsylvania (U.S.A.), in late 1700s, and were pulled by a selected breed of draft horses, called Conestoga horses, often 17 hands high, a breed considered extinct. This wagon was capable of carrying 8 tons of stuff, through rugged territory. They were used for commercial purposes and also by early settlers, until the advent of the railroads.

He built the amazing undercarriage on this wagon, exactly like it would have been built, in reality. This entire project took him 95.5 hours to complete. The wheels (to me) are the most impressive, and were made one spoke at a time, in a special jig, with a metal band outside the rim. I made the (easy) feed sacks and bedrolls (inside), and canvas cover.

One side of canvas was left open for viewing. That's a feed trough hanging off the back. 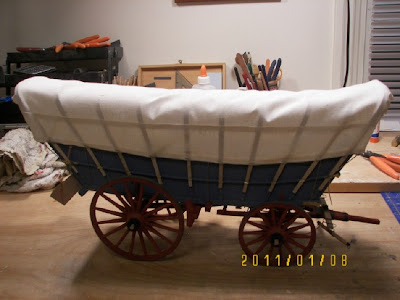 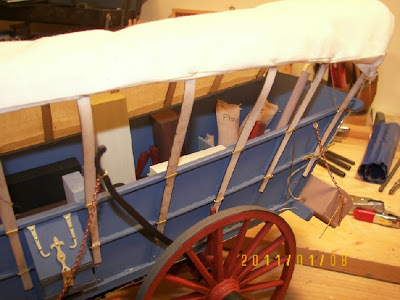 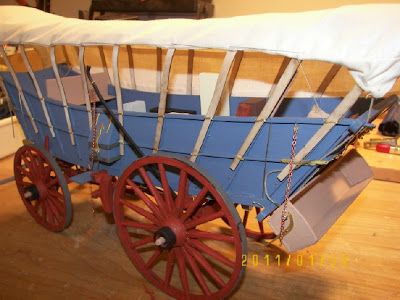 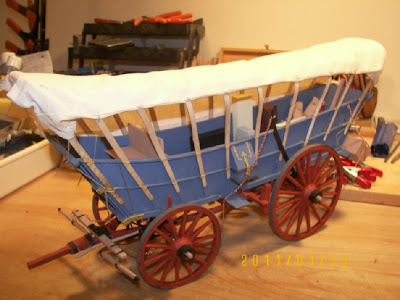 Our Studio is small - if he rolls his chair back while I roll my sewing chair back, we bump. And lately, I even have my sewing desk expanded, taking up even more room! We need a bigger house to hold all these projects!
Posted by Elaine Adair at 11:15 AM

Please tell you husband I think he is incredibly skillful! Also thank you for sharing the photos - how fascinating!

We went through Conestoga, PA last spring (on our way to Lancaster for the big quilt show) - that was the first time I ever heard where the originals came from! :)

Imagine how much of American life happened (at least iconically) in those wagons! Also, most of the folks setting out in them were young couples - tough folks!

Isn't it the truth! No matter what our space we always need more. Especially here as NO basement to store the overflow!

Very impressive. Makes me wonder how long it took to build a regular size one. Hmmmm.

Wow-WEE! That's very impressive work! The wheels are just fabulous, as is the detail work. And your canvas cover is spot-on too.

Two craftsmen in one room, what an abundance of talent.

Wow - that is a work of art! Two talented people in one house.

What a talented couple you make!! I've never seen this kind of model before, but very impressed with the detail!

It's magnificent. I'll bet that there are museums and galleries that would be happy to display it. It's a piece of history, even if it is newly made.

Amazing work--how nice that you can collaborate and don't mind a bump or two :)

I cannot imagine all the little fiddly things there were on that wagon. I live not far from where they rebuilt or build from scratch real wagons--Hanson Wheel and Buggy---Letcher SD. They have a wonderful website with pictures. I know the owner's mother and get a great tour from her! She does the leather work for them.

Truly amazing! You guys never seize to amaze me.

fern and jim really enjoyed the quilts and conestoga wagon