Mesa Verde - The Ancient Ones, Ruins

After a day on the Durango-Silverton narrow guage rail ride, the second day of our "package" linked with Mesa Verde ruins. There was an option of riding a bus with no personal guide but I had smarts enough to plan a smaller group with our own archeologist, Denise. We were thrilled with her knowledge, suggestions, theories - an almost-private archeologist. There were only 3 other people on our tour. She even had a picnic lunch planned for us. I can't count the bottles of water we each consumed!!!

Mesa Verde is in the southwest corner of Colorado, almost into Utah, Arizona, New Mexico. Unless you looked closely at the canyons, you would not see these ruins.

The inhabitants left the area about 900-1000 A.D., for parts unknown -- still a big mystery. Theories are they lost water seeps, or they used up their wood, or drought, or collapse of the civilization due to too many people, or a cosmic event. It is estimated there were, at one time, 50,000 inhabitants in this 4-corner area. 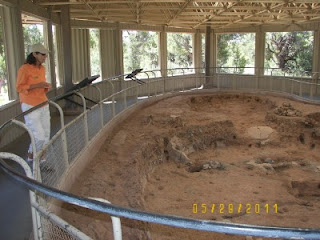 This is a kiva, a living space, that would have had a roof over it. They had an excellent command of fire drafts, air flow, baffles built into the sides of the kiva, all to make their space comfortable. We heard wild turkeys in the scrub. Turkeys, beans, squash, corn were a staple in their diet, when they began farming.

I decided to walk down into one of these ruins, while DH and the archeologist stayed above, studying other areas. This was very strenuous for this ole gal, no handrails, uneven stones, some places, only ancient toe holds, and by the time I had to haul my sorry butt up the last two ladders, I thought I'd met my demise! There was no other way out, no backtracking, no elevator, no helicopter, and 30 people behind me (also huffing and puffing). My attention was on my feet and NOT going over the edge, so photos are few! I was the oldest and probably the tiredest! But I DID it. It took my legs 6 days to recover. The rest of our group later went on another walking tour, but I just could NOT go another step, so DH and I did the people-watching thing.

I will let the photos speak for themselves. Just LOOKING over the ledges is astonishing - you don't need to take the walking/climbing/gasping tour. The area is honeycombed with sites. If possible get a tour with an archeologist. 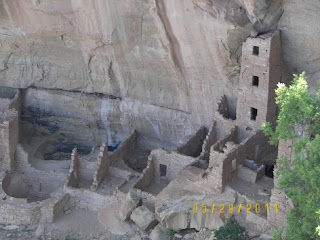 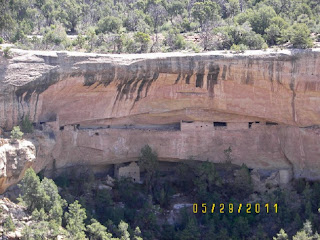 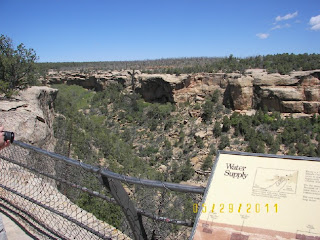 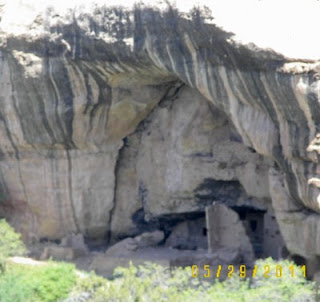 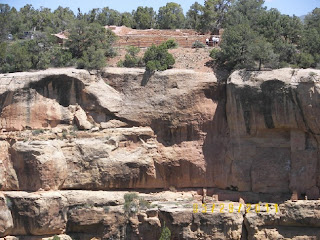 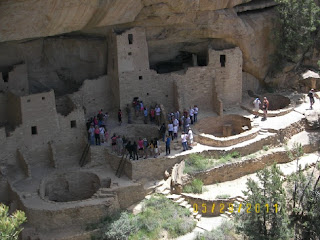 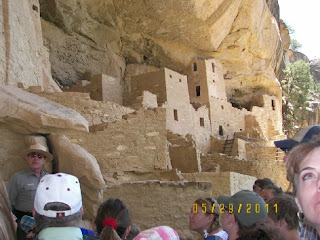 Wonderful! They were so clever to build those.

Amazing! Why were they living down there? Who/what were they hiding from? Or was it protection from harsh climate? These things make me so curious. I like understanding how people thought/think. I'm really enjoying your travelog. Thank you so much. What an interesting vacation!

How neat! If we do a tour, it's always wth a small group.

We did this on our trip too! Amazing isn't it? Did you get to Glenwood Springs and swim in the hot tub olympic sized pool too?? Your trip is bringing back all those memories!

That sounds like a great trip. I may have to pick your brains sometime on it as it looks like something John and I would like to do. Have fun on the rest of your trip or rest up if you are home already.

Great pictures. Glad you made the hike and survived to share it - !

Absolutely thrilling! How wonderful you had this opportunity to visit the ruins. Again, beautiful pictures.

I visited Mesa Verde a number of years ago and it was pretty arduous just walking up and down to the bottom and up again on the path--we didn't have time to take the tour but it was breathtaking to look at. Sounds like you went all the way and experienced it all :)

Wow, how interesting. When I see thing like this I think of the Earth's Children books and how they lived.