Last Friday I went to North Platte with a friend for the State Guild Convention. Most gals were there for classes and vendors. We were there for Vendors.

Temps are expected to reach upper 90s today. No traffic out this way, no problem. A.C. had been blasting us out, so that got turned down a bit -- uhhh, actually it's NO LONGER blasting us out??? it's kinda tepid -- well it's early in the morning and still fairly cool. We're tough -- we can manage -- roll down the windows!

By the time we arrived at our North Platte destination, it's about 90 degrees and we don't have A.C. But the Convention Center was cool, we had one great time, helped the economy a LOT, got back in the vehicle (HOT) and went to lunch at Applebys - life is good. We called an A.C. repair shop and soon were heading back home in delicious air conditioning - how did we ever live without A.C.?

20 miles into the homeward trip, A.C. went out again! This is no joke -- we're both NOT looking ahead to returning across HOT, wide open spaces, no people, no rest stops, no gas stations, with NO A.C. This has now become a serious issue -- we have consumed our iced tea.

(Photo below is indicative of the REAL geography/landscape, but the road was not quite THIS remote!) 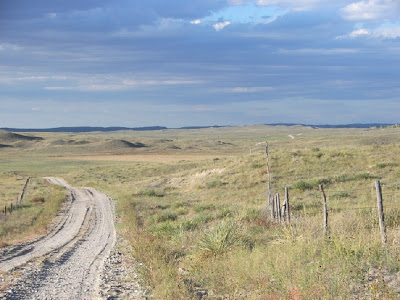 Two hours with no A.C., and 60 miles to go, we are both drenched in perspiration -- we've removed our jewelry, loosed clothing, pinned hair up, NOT concerned about our bedraggled appearance, and we finally come to a Stop Sign which meant "60 miles to go." --- it kinda sneaked up on me and I stopped with a non-approved jerk, and off we go again. Guess what, the A.C. came back on. But how did that happen???

Another 10 miles and off it went again. OK, what's happening??? Just for the heck of it, I'm going to stop on the road, with a jerk, and see what happens. Yep, it turned back on! Logical, no? but it worked. This went on for 7 stops!!! Every single time it quit after 10-15 miles, stopping with a jerk caused it to start again.

DH insisted we were making it up! He won't let me go with him to explain the issue at the air conditioning repair shop!
Posted by Elaine Adair at 6:42 PM

You poor girl. I can't imagine driving in that desert with no AC. It got up to 86 in my studio this afternoon and I called it quits and ran to the air conditioned house. 99 would be way too hot for me. Glad you made it home OK. And curious to know what was causing the trouble.

Happy to hear you safely returned home..half baked I am sure. I would say the fan belt was slipping and when you jerk it would catch..only a guess? Wanna hear about all the classes you took at Quilt NE.

Men always seem to ask 'Why?" I just think that it works so who cares why.

If a jerk fixed it so you were cool, that's great! My camper fridge quit a few weeks ago, and then mysteriously started up again after a few days. I am holding my breath!

Finally catching up on my blog reading since the weekend in North Platte. Loved the quilts you had on display and so sorry I didn't meet up with you while there...oh well maybe another time.

I can't imagine that long a trip when it was as hot as it was. Those quick stops remind me of the air conditioner in our pickup. It stops occasionally and to get it going again I just have to let up on the gas pedal for a little bit...go figure. Hope yours is fixed by now.