Instead of a binding around the center circle, I chose to add a fused facing. After panicking for a few hours, I realized this is just like the facings I used to put around collars, back in the days of garment sewing. I dug out my 'professional' compass and marked the line, then remarked it bigger, then smaller! LOL Then I sewed - I seem to remember the term "staystitching"-- the line in preparation for cutting out the circle.

(Oh crud - I added these photos using a new method and they don't leave me room under the photos for text. I know you can figure it out but it's a little confusing.) 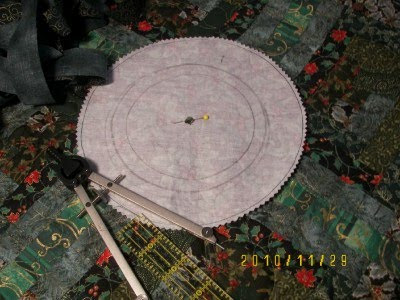 I opted to make a slit in the skirt, as opposed to a center hole only, but that DID leave a very acute angle to bind, something I've not done before. However, a bit of fiddling, and some hand holding by fellow quilters, sent me in the right direction which ended up with satisfactory, pointy points. 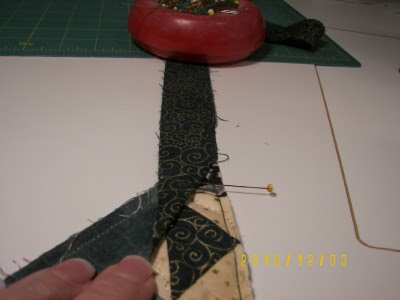 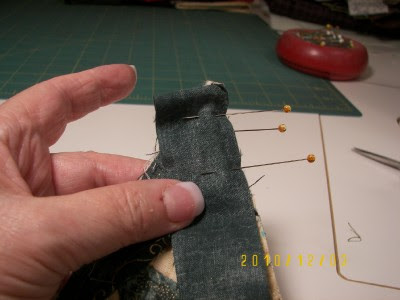 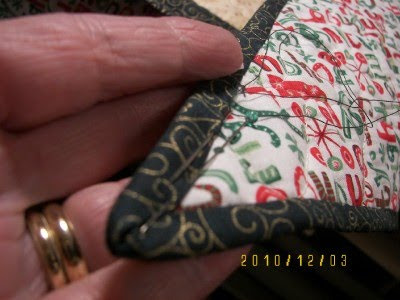 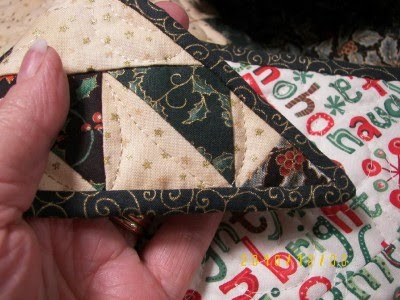 Done, and ready to mail - with optional ties. It's about 54 inches on widest points. No pattern, I just made it up, starting with a basic star block. Any blocks with a single diagonal line can be made log cabin style. That left it square, and I wanted to have 8 sides, so I added the 4 Log Cabin sides (with triangles in center along seam line.) 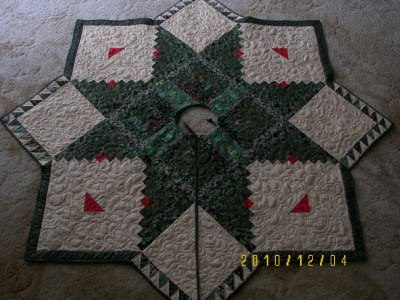 Oh My GOSH Elaine!! It turned out GORGEOUS!! You did a fab job on the binding corners!

You should be very proud of yourself!!

Wow Elaine, it is beautiful!

I have followed your process in making tree skirt and the finished project is just lovely. What a great job. Thank you for sharing all the process. Love Lois

Nicely done, Elaine. The recipient will love it, I'm sure!

Beautiful! You did a wonderful job!

Bravo! And the slit worked out just fine. They will love it!

Elaine, that is so pretty. Great job. You're a designer and innovator. And it's in the mail. The recipient is bound to be pleased. Pour a cuppa, take a deep breath and pat yourself on the back!

That turned out so nice, you did a great job! If I didn't already have a quilted tree skirt I'd try to con you into making one for me. LOL

Beautifully done! But then I read you have to mail it away ... I didn't realise it was for someone else I thought you got to keep and enjoy this one :)

A beautiful finish for a beautiful tree skirt. Congratulations on persevering all the way to the end. Great job!

You did a great job. This turned out so beautifully!!

That sure turned out nice and will look so good under your tree. Love the quilting - it shows up so well on the last photo.

Wow .. the before and after quilting is amazing!!

Wow. This is truly the best Christmas Tree skirt I have ever seen. Beautiful design, yummy colors, excellent quilting. Love, love it. Inspirational.

It is just beautiful! You did a great job designing, piecing and quilting it!

Elaine this is absolutely amazing. The recipient of this quilt is VERY lucky! (You should think about doing a pattern!)

This looks great. I would have been afraid to cut through the quilt. I'm glad you are braver than me!